Dientsbier: US will never build radar base in Czech Republic

The chairman of the Senate foreign affairs committee says he believes the United States will never build a radar base in the Czech Republic. Jiří Dientsbier, who was Czechoslovakia’s first post-communist foreign minister, said on Sunday that the Obama administration had indicated it would drop plans for an anti-missile defence shield that would include a radar base in central Bohemia. Speaking on a TV debate programme, he also said US Vice President Joe Biden had always been against the successor to the so-called “Star Wars” programme of the 1980s. Mr Dientsbier said the global financial crisis could make a good pretext for abandoning the project.

Opinion polls have consistently suggested that around two thirds of Czechs are opposed to the planned radar base. Prague and Washington have signed treaties on the radar, though the lower house of the Czech Parliament has not yet voted on the matter.

Minister bestows award for services to diplomacy on 12 people

The Czech Republic’s minister of foreign affairs, Tomáš Petříček, bestowed Medals of Merit for Diplomacy on 12 individuals on Monday.…

US military convoy to travel across Czech territory 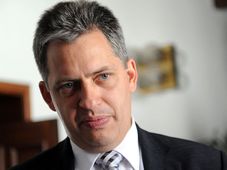 A rising star of Czech left-wing politics, Social Democrat Senator Jiří Dienstbier promises to be a credible and consistent president.…