Czechs preparing to take over EU mission in Mali

The Czech army is preparing to take command of the EU mission in Mali in June. The Czechs will take over from the Portuguese, and remain in charge of the operation for a period of six months.

Brigadier General František Ridzák who will head the mission is to travel to Mali with around 40 soldiers to reinforce the 120-strong contingent already there. Their main task will be to continue in the training of Mali’s army, which is fighting Islamic radicals in the country.The training was suspended in April due to the coronavirus crisis.

It will be the first time that a military mission on African soil is commanded by an officer from a Central European country, showing Prague’s significant commitment in this area. Czech soldiers have served in the EU mission in Mali since 2013. 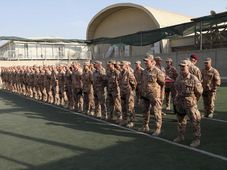 The Czech Defence Ministry has revealed the details of its foreign missions plan for 2017 -2018. The plan envisages continued participation…

The Czech army will take over leadership of the EU’s military training mission in Mali, Prime Minister Andrej Babiš and Defence Minister…

Czech Foreign Minister Tomáš Petříček (Social Democrats) is in Paris Wednesday for a meeting with his French counterpart, Jean-Yves…