The Czech Republic will extend random controls along its borders with Austria on Saturday, Interior Minister Milan Chovanec told Czech Television on Thursday night. The minister said security measures would be taken depending on how the situation develops in Austria, which earlier indicated it might close its borders at the weekend. If that were to happen Mr. Chovanec said the Czech Republic was ready to deploy soldiers and officers on the border and effect controls on international trains in order to prevent a massive influx of migrants. 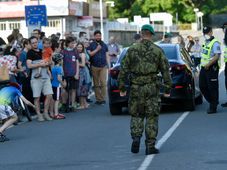 The towns of Český Těšín and Cieszyn in Poland lie on either side of the border, normally divided only by the River Olza. But now,…