On an official visit to Brussels, Czech Civic Democrat leader Mirek Topolánek harshly criticized the German authorities for harassing Czech drivers with excessive road checks. Increased controls of Czech cars happen most often in neighboring Bavaria, where traffic police are said to specifically pick on Czech drivers and make them undergo lengthy and thorough check-ups. The Czech Interior Ministry recently received eight complaints from Czech drivers, adding to a total of over 100 complaints since 2008. Mr. Topolánek labeled the behavior of the German police as harassment and added that it was in violation of Schengen law to pick on drivers of a certain nationality. The Czech politician demanded an apology from both the Bavarian and German governments and said the controls should immediately cease.

Lisa Miková, a 98-year-old Czech woman who survived internment in Terezín, Auschwitz and other Nazi concentration camps, has been awarded Germany’s…

Minister bestows award for services to diplomacy on 12 people

The Czech Republic’s minister of foreign affairs, Tomáš Petříček, bestowed Medals of Merit for Diplomacy on 12 individuals on Monday.… 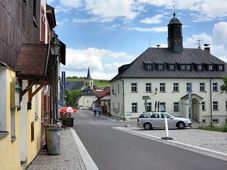 A Czech delegation is headed to Baku, Azerbaijan on Monday to lobby for including parts of the Krušnohoří mining region on the UNESCO…