The Czech central bank has warned that the country is heading into a recession, radically altering its forecast for the country’s economic growth to red numbers, predicting a 0.3 percent decline. It is the first time the country could slide into a recession in a decade. The bank’s governor, Zdeněk Tůma, called the prospect for this year’s growth a “negative zero”, citing falling exports as the major cause. The central bank also slashed interest rates by 0.5 percent on Thursday to a record low of 1.75 percent. The move was expected, given the low level of inflation in the Czech Republic and the grim economic outlook for 2009. 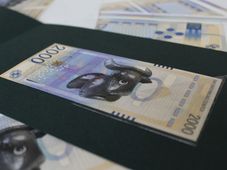 The same Czech banknotes have been in press for over 20 years. What could an alternative new design look like? That is the question…