Biden: US will build radar base in Czech Republic, if cost effective

US Vice President Joe Biden has said that the United States would press ahead with its missile defence programme in Central Europe, provided it works, is cost effective, and is built in consultation with Russia. The United States has been negotiating with the Czech Republic to install a radar base in Central Bohemia. Ten interceptor missiles would be sited in neighbouring Poland as part of the umbrella shield. Speculation grew this week that the new American administration may abandon the scheme, devised by President Barack Obama’s predecessor, George W. Bush. Mr Biden’s remarks in Germany on Saturday suggested that Washington was reviewing the multi-billion dollar project.

US military convoy to travel across Czech territory 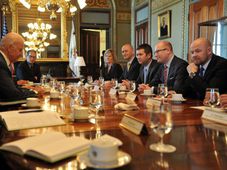 Russian President Dmitri Medvedev arrives in Prague on Wednesday at the invitation of Czech President Václav Klaus. His short visit…