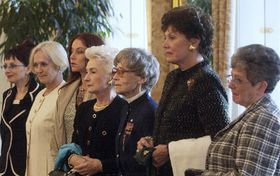 From right to left: Lady Milena Grenfell-Baines, Aja Vrzanova-Steindler, Barbara Lee Podoski, Eliska-Haskova-Coolige, Blanka Matragi, Bela Gran Jensen, Edita Koch, photo: CTK "I have noticed that Radio Prague has been looking into the problems of Czechs abroad as a part of the Week of Czechs living Abroad that was held in Prague recently. You mentioned only briefly that ten Czech women were given distinctions during that week. Could you tell us more about who they are and what they do?"

Yes we can and the ten Outstanding Czech-born Women in the World really are engaged in activities that cover a wide range of topics including politics, culture, and sports.

Let's name them in alphabetical order. Lady Milena Grenfell-Baines. Her name may ring a bell - Radio Prague has featured her in a report on the Czech cooker called "Remoska". She was the one who introduced it in Britain. She was also one of the Jewish children who were brought to Great Britain thanks to Sir Nicholas Winton in the "Kinder transport". They fled Czechoslovakia in 1939 to be spared from Nazi persecution. Lady Grenfell-Baines has been active for many years in promoting Czech culture, sports and goods in Great Britain.

Eliska-Haskova-Coolige left Czechoslovakia just after the Communists came to power. She now lives in the United States, where she's been quite active on the political scene. She has assisted five US presidents for a period of eighteen years, namely presidents Kennedy, Johnson, Nixon, Ford, and Carter, and worked at the US foreign ministry for nine years. She currently lectures at the Academy of Diplomacy in Prague.

Bela Gran Jensen lives in Norway where she has been dedicated to humanitarian work. In 1990, she founded the Stonozka movement, which sells paintings and drawings made by numerous children from all over the world and gives the proceeds to people in need. Some Czechs affected by the floods, also benefited from the programme.

Edita Koch emigrated in 1967. She now lives in Frankfurt, Germany, and is a renowned author and expert in literature. In 1981, she founded the Exil publishing house for dissidents.

Charlotta Kotik left the country in 1970. The great-granddaughter of T.G. Masaryk (Czechoslovakia's first president), is a curator at the Brooklyn Museum in New York. She is also active in the Centre for Contemporary Art Prague and has been engaged in further numerous Czech-related activities.

Blanka Matragi moved to Lebanon with her Lebanese husband in 1980. Two years later, she opened up her own fashion salon and has been a very successful fashion designer. Many Arab princesses wear her designs.

Meda Mladkova, another name you have heard here on Radio Prague, left the country in 1948. She founded the first ever publishing house for Czech exiles called Skutecnost. An ardent art collector, she donated her collection of Czech art to the Czech state in 1989 and established the Kampa Museum of Modern Central European Art in Prague, which was opened in September.

Barbara Lee Podoski immigrated to the United States just after the Nazi occupation of Czechoslovakia. She worked as a radio presenter for the Voice of America, and dedicated twenty years to the US Congress library.

Lea Vivot currently lives in Mexico and is known for her unique bronze statues sitting on benches, which can be seen in Toronto, Canada and in New York City's Manhattan.

And finally we have Aja Vrzanova-Steindler - the two-time figure-skating world champion. She immigrated to the United States in 1950 but has been actively supporting the promotion of Czech culture abroad.

And we move on to a rather shocking case that police in Moravia are investigating. Patrick Nol listens to us in Denmark and sent us the following e-mail: 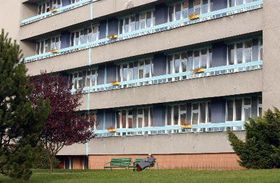 Home for the aged in Ostrava, photo: CTK "I was shocked to hear that the old-people's homes (forgive me if I am not being politically correct) in your country are treating the elderly so badly. How can Czech society just stand there and watch without doing anything against it?"

We believe that you are talking about a case in the Moravian city of Ostrava that has been covered by the media quite extensively recently. The police investigated at a home for the aged, after a nurse reported to social services that the elderly there had to suffer inhumane practices. They suffered from dehydration because they were only given boiling hot drinks. Hygene was also a problem as they were only given one bath a week.

Then there was an old lady who broke her leg. She complained of the pain for twenty-three days, during which the affected part of her leg swelled up and turned red. It was finally x-rayed and diagnosed as only a fracture.

But this one case does not represent all homes for the elderly in the country, although it is sad how the states of such homes vary throughout the country. Some homes are newly reconstructed, have a pleasant staff, offer entertainment, and large green spaces where clients can take walks or relax. Then you find others that are old, dark buildings, with no green space, offering very few activities. The irony is that both places cost the same.

So in this country, it really is a matter of luck. Whether an older person gets into a good home depends on where he lives and whether there is any free space.

And whether one home is nice or not all depends on its financial situation, the number of donations it gets etc.

Peter Ngabe from Nigeria has sent us an e-mail with the following question: 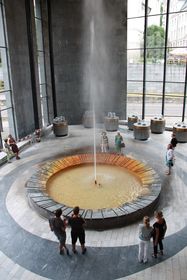 Karlovy Vary, photo: Barbora Kmentová "I just looked at your website and think I will like the spa at Karlovy Vary very much. Is it your only spa town or are there some more. I am Nigerian, so I also would be grateful if you could find out whether foreigners can come there too."

Mr Ngabe, you will be surprised to hear that a third of the total numbers of visitors to Czech spas are foreigners. The reason is because spas make much more money off foreigners. They all pay for their stay, while only fifteen percent of Czechs pay for it out of their own pockets. Most Czechs visit spas only when they have a doctor's order, so all expenses are paid for by their health insurance.

On average, foreigners spend about one hundred US dollars a day and stay about fifteen days. It is mostly Russians, Germans, and Israelis who visit Czech spas.

And Karlovy Vary is not the only spa town we have. Other popular places are Marianske Lazne (Lazne means spas in Czech), Frantiskovy Lazne, Lazne Luhacovice, and Podebrady.

Please note that as of October 27, we'll have a new broadcast and programme schedule. So, those of you interested in a copy of the autumn schedule, can send us an e-mail to english@radio.cz, or a simple letter to 120 99 Prague 2, the Czech Republic.

We'll also have the new programme and times of broadcast on this website.

Another quick reminder we'd like to make concerns those who send us reception reports. Please remember to include programme details. It is very important that you tell us what you heard in the programme, to confirm that you have really listened to it.

And you can also see what a real reception report should preferably look like on this website.

Thank you and please keep the letters coming!

Once a sizeable organisation that stretched across many Western European countries, Czechoslovak Exile Scouting is a relatively little… 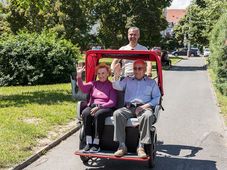 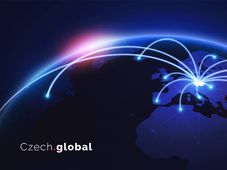