It’s the thief’s turn to cook dinner! Why are so many tourists spending hours in a certain public toilet. And, how many men in the Czech Republic can say they are Vaclav Havel? Find out more in Magazine with Daniela Lazarova. 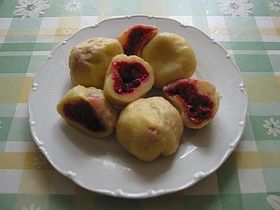 The internet daily novinky.cz reported a strange story recently. An intruder broke into a family home in the town of Velké Karlovice, Moravia. He took a shower and was just planning to wash his clothes when the family returned home unexpectedly. The man apologized profusely and told them so touching a story about his life and problems that they failed to call the police and simply let him go, never expecting to see him again. However a few days later the man was back – again at a time when he knew everyone to be out of the house. With money acquired from returnable bottles he had collected somewhere he bought some groceries and proceeded to cook the family lunch – fruit dumplings – a Czech summer favourite. He left them on the table with a thank you note.

A crowd of people gathered to watch professionals at work at the Festival of Melons at Prague’s Zličín shopping centre last weekend. The event included both carving and eating contests and an exhibition of all the carvings made. On display were flower and animal motifs, ships, cars, birds and even faces of celebrities. Those who are familiar with the art could distinguish a variety of carving schools – Taiwanese, Spanish, Hungarian and others…and those who were new to it just stared in admiration. “I’ve seen it on the Internet but seeing it with your own eyes – and the speed with which it is done is something else” one visitor told the CTK. Jakub Hubinger, photo: CTK Seventy-two women, men and children volunteered to get their hair cut in a 24 hour charity marathon. Stylist Jakub Hubinger worked around the clock – with only three five minute breaks for a drink of water and coffee. The event was his idea – he said he often worked 15 hours a day and wanted to see how long he could work without in one stretch. His own clients knew about it and others stopped by at the hairdressers when they saw that there was something out-of-the-ordinary going on inside. When they learnt it was for charity many volunteered on the spot – even girls with long hair who had had no intention of getting it cut. Clients could pay whatever they wanted for the haircut – and the collected sum went to help the Association of Patients with Cystic Fibrosis. Most of the 72 volunteers were women, but 19 of them were men and the youngest client was a three- year-old girl.

Established in the mid 13th century during the reign of King Wenceslas I, the town of Loket in western Bohemia is an attractive tourist destination. With its picturesque burgher houses and medieval castle it has a lot to offer – but not all tourists who visit the place get to appreciate the surroundings. Some of them end up stuck in the town’s public toilets. Not that there’s anything wrong with the food mind you, as one British visitor could confirm. She ended up stuck in the public toilet for an hour and a half this week when the lock refused to open. According to the news server iDnes the local fire crew are quite used to this situation. According to their spokeswoman the fire crew have already been called out eleven times to this particular toilet – “on average we get an emergency call there twice a month, those doors are dodgy,” she told the internet daily. However Josef Novak – an official from the town hall – denies there’s anything wrong with the public toilet – although the locks do get stuck rather often. He says there are two identical toilets there and there’s never anything wrong with the one for gents. “It’s the ladies, they don’t know how to use it properly,” he told the daily. Not a very sympathetic stand. In any case for the time being the ladies’ toilet is being serviced – so the ladies in Loket have to go to the gents, which may not be a bad thing. But otherwise Loket is a beautiful place. 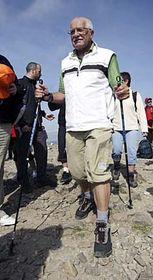 Václav Klaus, photo: CTK Sixty-eight-year-old President Václav Klaus joined thousands of people in climbing to the top of mount Snežka – the country’s highest mountain peak- as part of the traditional St. Lawrence pilgrimage. The president covered the steep seven kilometer climb in an admirable two hours and forty five minutes – joking about this being a trial by fire for his artificial hip joint. The president underwent hip surgery last summer, but is now said to be in excellent form. On reaching the top he asked for a cold beer which his entourage instantly produced. Together with a crowd of Czechs and Poles who took part in the pilgrimage Mr. Klaus attended an open air-mass outside the chapel of St. Lawrence on the mountain peak. 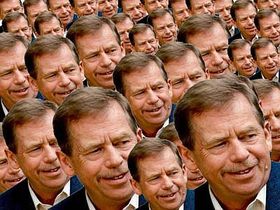 And finally – a survey of the country’s most common names has revealed that there are 119 Václav Havels in the Czech Republic. The most common name of all is Jiří in combination with the surname Novák – which would translate as George Newman and the most common female name you will come across is Marie Nováková – Mary Newman.