Stealing a railway bridge is not as difficult as it may sound! Pork crackling, tongue in aspic or some chopped liver? Former cabinet ministers enjoy a pig slaughtering feast. And, forget about the toilets, some Czech schools have introduced smoking rooms. Find out more in Magazine with Daniela Lazarova. 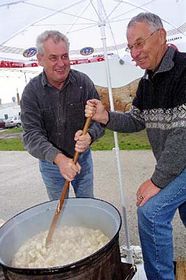 Milos Zeman and Jan Fencl, photo: CTK While the leadership of the ruling Social Democratic Party has been labouring under the weight of a serious political crisis, the former prime minister Milos Zeman and his one time cabinet favourites have been enjoying the pleasures of rural life. Last week they gathered at the ranch of the former agriculture minister Jan Fencl for a proper pig-slaughtering feast.

The group of ex-ministers were clearly having a great time as they cooked the traditional meat dishes: pork crackling, tongue in aspic, chopped liver heart and kidney pies and for the real gourmets, even pigs' ears and a thymus gland or two. All this, washed down with the best Czech beer and Moravian brandy. "Finally we can enjoy ourselves without the burden of state affairs," the former prime minister noted as he stirred a huge pot of pork crackling.

Sometimes the things that thieves steal are mind-boggling. Last week they managed to steal a ten metre long steel railway bridge, selling the parts to a scrap metal salesman. Fortunately the railroad and bridge were no longer in active use, but were in the process of being reconstructed by a team of enthusiasts who are striving to turn it into a historic railway route for trains pulled by a steam engine. This stretch of the railway is 20 kilometres long and was built in 1890. The club members are devastated but say they'll continue work on restoring the track anyway. Meanwhile, the Czech media are wondering how it is possible for a scrap metal salesman to buy a bridge without bothering to enquire where it came from or even asking to see some kind of ID from the guy selling it. Some time ago thieves disposed of a river barge in exactly the same manner.

The Zlin Zoo has announced a particularly successful breeding season in its Australian pavilion. Visitors can admire ten new baby kangaroos and moreover one of them is an Albino! "People tend to think that one of the mothers is carrying a white rabbit in her pouch, but it really is an Albino kangaroo baby," the zoo spokesman told reporters who gathered to admire the newcomer.

Pavel Hudecek aims to set a bizarre world record. He is planning to cross the Czech Republic on roller skates pushing a twin baby carriage with his baby daughters in it! Hudecek is now training for the big event, which is expected to last for 9 days in the course of which he should cover 350 kilometres. He is clearly delighted with his twin daughters, who are now seven months old, and hopes to give them an experience they'll never forget, as well as a place in the Guinness book of records. Challenged as to whether two ten months old babies will be happy to spend nine days on the road he says: they can sit up and watch the scenery. It is not yet clear how he plans to handle feedings and nappy-changing and presumable his wife will be an important figure in the background.

One thing the Czech Republic seems unable to do is follow the declining trend in smoking. Not only are older Czechs unwilling to kick the habit, but an increasing number of young people and in particular an increasing number of women are taking it up. A survey among 15 year olds indicates that 55 percent of girls and 45 percent of boys smoke regularly. More disturbing yet is the fact that schools seem to have given up on their efforts to dissuade young people from smoking. Quite a few secondary schools have now introduced smoking rooms, or smoking areas, for their 15 year old students and others are following suit. "I don't approve of it," says secondary school director Vaclav Hanus. "But we have found it impossible to eradicate and at least this way they use ashtrays and don't do it in public view on the playground or secretly in the toilets." All students under 18 who wish to use the smoking room need to get parental consent. Some parents are shocked, but the schools who have smoking rooms argue that if parents can't prevent their children from smoking then how can they expect it of the school authorities.

An international contest in slow pipe smoking is expected to bring 120 contestants to the town of Olomouc this weekend. There are entries from Germany, Poland, Hungary, Slovakia and different parts of the Czech Republic. Four of the contestants entered are women. All contestants must be over 18. They will all be given the same kind of pipe, three grams of tobacco and two matches. They will have five minutes to fill their pipes and another minute to light them and then make them last as long as possible. The contest is open to the public - but a word of warning - you might find it somewhat tiresome to watch a group of people smoke for three hours. The current Czech record in slow pipe smoking is exactly three hours and four minutes. The world record is 3 hours 18 minutes. If you think you can beat that there's nothing to stop you from giving it a try in your own home. Just remember to use only three grams of tobacco and - no cheating!

The legendary two cylinder Jawa 350 motorbike will no longer be on sale in the Czech Republic. The popular Jawa, which first hit the road in 1948, does not meet strict EU environment norms and its sale has been banned in most EU member states. Jawa Motor trade director Petr Jalovecky says that although her days in this part of the world are numbered, the company will continue production, exporting the Jawa 350 to south America, Cuba and northern Africa. 85 percent of the company's production is export oriented, but with half a million JAWA motorcycles registered in the Czech Republic, you are bound to see plenty of them on Czech roads.