I was looking up 'gold mine' on the Net to see - in these days of Prague's hotel over-capacity - who was still saying this today of the city's tourism when I found it... a real gold mine just 30 kilometres south of the city at Jilove u Prahy, now a museum, open on summer weekends. Somehow a gold mine has a certain ring to it. There's a medieval silver mine open at Kutna Hora, but gold... now that's the real thing!

St Joseph's mine Needless to say the Jilove mine is nearly impossible to find. You can pass right through the town without seeing any helpful big sign saying 'Gold Mine' in any language. Then I returned and by the church are boards with a trail marked (in Czech but easy to comprehend) of the area's historical landmarks. It's then that you realise that those tiny signs in the town to 'St Joseph's Gallery' actually refer to the mine - which is an adit gallery (ie horizontal shaft), and St Joseph's to distinguish it from the dozens of mines which operated in Jilove's great golden age from the 12th to the 14th centuries, although some persistently survived later. The last closed as recently as 1968.

The signposted lane - 3 kilometres out of town - squeezes down and down into a narrow valley to the point I was certain I must have gone the wrong way when there it was... one single parking space (empty) dominated by a large No Waiting sign ('Space reserved for museum staff') and a wooden hut, by which a bloke with a hammer was chipping at a big rock. I watched for a moment hoping to see a shiny gold nugget emerge, but there was a tour just off - and I took it.

St Joseph's mine, photo: superklub.chytrak.cz With plastic hard-hat and overall and at a price 20 crowns less than posted on the website (50kc), ten of us entered what is basically a crack in the rock going more than 200 metres into the hillside. I'd been given an information sheet in English, which is better than most attractions provide foreigners in other countries, but for safety reasons we had to be escorted by a guide. While he explained everything I had time to reflect on this fearful place where hundreds of men over several centuries had clawed out the filling of this granite sandwich to win - by the time the mine closed - an impressive several tons of gold. But this is no place for sufferers from claustrophobia, and it doesn't take much imagination to conjure the place up in virtual, candle-glimmering darkness, its fetid air filled with dust.

The creepy part is the ladder and haulage chute descending to a lower level - grey and faintly glowing in the brim-full flood water. I expected to see a gnarled grey hand still clinging on to the worn timber rail. As scary as The Titanic. By now I'd have willingly paid the extra 20 crowns to get out early. 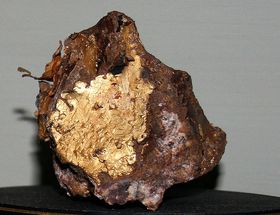 Gold from Jilove mine By the stream outside some men were actually panning for gold. But they didn't have that 'Walmart Prospector's Kit' recreational air. They looked in grim earnest - like there would be empty plates at home or unfilled glasses at the pub if they didn't find at last some reward for their labours.

Not just Prague is - or was - a gold mine. Dig deep on the Net or in guidebooks and there's a wealth of attractions to visit in Bohemia - and luckily most of them haven't yet been sanitised to comply with upcoming EU regulations. In its simple, unsophisticated presentation, St Joseph's mine really does give you some of the feeling of being one of those tough miners of old, winning treasure for their masters - and probably not much for themselves. The former gold-mining town of Jilove

In this week's Spotlight, we visit the little town of Jilove, some 20 kilometres south of Prague, along the lower Sazava River. Despite…