Our Lady of the Snows

I'll give you an instance of how an afternoon in Prague can work itself up into something special, even from a dull start. It was a Friday. I had finished a meeting at 2.30. It was wet and grey, but I suppose I should point it was Good Friday. I was taking the cut through the old monastery garden that gets one to the Wenceslas Square tramstops when I had an idea. Instead of waiting forty minutes at Masaryk Station for my next train, I could pop in to Our Lady of the Snows, the vast, tall monastic church, across whose ancient garden I was now hurrying. Unlike most Prague churches, Our Lady of the Snows is usually open - and also unlike many of them, it has retained a lot of its gothic character. I would sit there for 20 minutes or so, as I had promised myself to one day study its magnificent reredos, or altarpiece.

The church itself is one of Prague's tallest, too - that being emphasized by the fact that it was once intended to be three times as long. Long ago wars and religious disputes had drastically shortened its ambitions, so now it is mainly only the chancel of what was intended, soaring to a height of 35 metres. After Communism it had been handed back to the Franciscans.

Desperate to reassert Catholicism across the land after the 17th century, the Hapsburgs had undertaken Rococo make-overs for most churches. My earlier glance into Our Lady of the Snows had misinformed me that it too had been done over, the altarpiece being one of those florid orgies of stonework that resembles some wedding cake design for Sir Elton John rejected as being too OTT. But sitting down now in the gloomy quiet I could see I was wrong. The altarpiece was much earlier - was that more classical early baroque of the 16th century. This reredos fills the east end of the building; it is immense - the tallest in Prague.

It's like some great galleon that has blown in and got jammed against the angled end of the church. More than two dozen life-size figures cling to its rigging, topped by poor JC nailed to the crows' nest. There, up where the topsails would be, is the figure of Emperor Charles IV himself, holding onto his heraldic pennon for dear life. No figure is idle. Even those curious flat columns beloved of late renaissance architects, the ones which have female heads embedded in them - even those faces seem willfully animated, in the way children's are when told to stand absolutely still and not to fidget! Church of Our Lady of the Snows I was enjoying this freeze-frame movie in stone when I became aware that the church was filling up. Not the usual tourists, but the little old ladies who seem to be produced exclusively to inhabit drafty pews or to kneel in dark confessionals. Good Friday! Of course. A service was about to start. I decided I would stay. The trains were once an hour, after all. When the place was nearly full, in came a most beautiful young woman - led by her guide dog. She was wearing the most wonderful woolen jacket. It was of mossy colours in many hues. A dull claret-coloured silk scarf perfectly complemented it. All this was strange, as poor blind people are so often dressed by someone else whose taste never seems to match them. Here was a girl from the Hollywood movie version of her own life.

The three old dears, who were patently regulars, who shared my pew were beside themselves with benign curiosity as the young woman, having deftly manoeuvred herself to a chair, began to unpack a large, plain black back-pack which she was carrying. By oft experience she did this with the ease of the sighted, unpacking first a bed for her dog, then a blanket. She was obviously aware of the cold stone floor she'd otherwise be subjecting her faithful companion to.

The dog took its ease, and the service started. The priests and their retinue were fourteen strong, standing in the chancel like extras waiting for direction - awkwardly and unrehearsed - as the cross made its solemn round of the building. Listening in a foreign language seems to stretch the time, and I was busily trying to work out just how many Stations of the Cross there were... could there be as many as 14, I worried? Or just a dozen? It dragged. The light began to fade on the altarpiece, but I was determined, when it all ended, to compliment that wonderful girl on her colours. If she couldn't see in the mirror, then I'd do it for it her. Just this once, then disappear into the street. 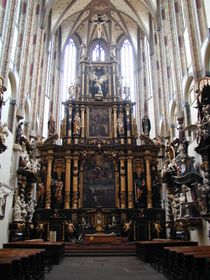 Church of Our Lady of the Snows But as Station 12 completed, I managed to make out the announcement of the priest that now Mass could begin! I didn't think I could survive another hour, so I slipped out. So much for my resolve to compliment the blind girl.

The tram to the station took me past St Jindrich's Church. I noticed its door was open too. But I had once been tempted to sit through a Mass there as well - in Christmas week, it had been. I had taken communion, and on returning to my seat I noticed the man who had been sitting in front of me, hunched over something, had actually been sharing Mass with a strange doll - a knitted thing with a weird blank expression. As the Mass had ended, he had carefully taken off the doll's lace cap and wrapped that in tissue paper, and then had packed his doll away in a shopping bag. Who was she, symbolically, I wondered? His late wife, his dead mother or perhaps the woman he never married but still longed-for? I would never know.

That had been another one of those afternoons when I'd been tempted to go into church doors in Prague! 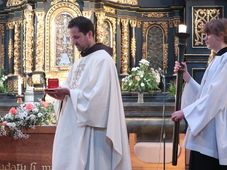 On Tuesday evening a special delegation from Italy delivered a relic to the Church of Our Lady of the Snows in central Prague. The…

Anthropologists and theologians are exhuming the remains of more than a dozen Franciscan monks who were killed in the early 17th century.…