If someone were to ask you to list five national symbols of your country, would you be able to name them? Of course, the most common are the national flag and the national anthem but what else represents your country? I attended a discussion on this topic the other day and realised that the very thing that Czechs have always been known to be proud of - their nation - is losing its defining symbols... 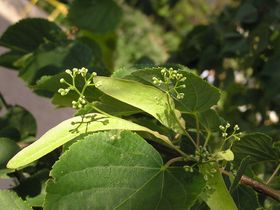 Limetree - one of Czech national symbols, photo: Andrew Butko, Cretive Commons 3.0 The Czech Republic is becoming ever more western and what's even worse is that this transformation is so gradual that citizens are not aware of it. Czech goods are slowly but surely being replaced by foreign ones. Czech films are being pushed out by western productions that offer a different type of entertainment with special effects, different humour, and the introduction of people and places we got to see little of before.

And of course, we cannot help but notice a big change in food. An ultimate Czech experience used to be a simple lunch at a simple restaurant. The food, the people, the waiter, and even the smell all contributed to an atmosphere that was truly unique. Today, it is very hard to find. Last week-end, a friend from the United States visited Prague for the first time ever. He wanted to try typical Czech traditional food in a local restaurant... easier said than done. Chinese stir fry, pasta, pizza, and the usual fast food reign over Prague today... and if you do find a place that advertises good Czech food, it's either expensive, has been "westernised", or is an old, dark, unappealing pub. The same goes for groceries. The fridge of an average Czech family today is stocked up with mainly foreign products.

But all of this would not be so bad if it weren't for an alarming change in what we call the Czech sense of black humour. Czech jokes used to be witty, had double-meanings, and were unique - you'd hear them and think "wow, that statement wasn't just funny, it was also very smart". With the growing popularity of western sitcoms, and comedies in general, the younger generation's humour now lacks that creativity and wit.

I once asked a former Czech dissident whether there is anything at all he actually missed about communist Czechoslovakia. He said to me: "you know, funnily enough it's the sense of nationalism". A friend of his then turned to him and said: "I know exactly what you mean. We've won our freedom but at the expense of that certain "Czechness", we've always been so proud of."