As currencies go, the Slovene Tolar had a short life. It was around for just 15 years before the euro, the common European currency, took over last week. That's when the tolar was no longer accepted for purchases in Slovenia. And there was quite a party to mark the change-over with top EU officials in Ljubljana for the event: 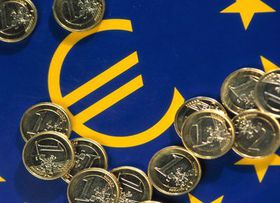 Photo: European Commission The ceremony "A Welcome to the Euro" was held after a two week period of dual circulation of the tolar and euro came to an end, and the single European currency became the sole legal tender in Slovenia. The event was seen as an opportunity for EU member states to celebrate the expansion of the eurozone to 13 members and stress the symbolic commitment to further expansion. German Chancellor Angela Merkel, whose country holds the rotating EU presidency, opened the central ceremony saying Slovenia's adoption of the euro was a "moving moment". Hungary's Prime Minister Ferenc Gyurcsany stressed Slovenia's role as a good neighbour and admitted to be a little jealous:

"For all of us Slovenia is a close partner and a reliable friend. For Hungary it is also a neighbour, as a good neighbour as one can hope for. You may ask, don't I feel jealous now? All right, I do but only in a good sense. I look at this great step for Slovenia as an example, an example that we in Hungary and elsewhere should follow."

Apart from Merkel and Hungary's Prime minister, the central ceremony was also addressed by European Commission President Jose Manuel Barroso, European Central Bank President Jean-Claude Trichet, Italian Prime Minister Romano Prodi and Luxembourg Prime Minister Jean-Claude Juncker, among others. The ceremony was the final part of a day of celebrations of the arrival of the euro in Slovenia. Earlier in the day a conference was held on the euro, featuring finance ministers and central bankers from around Europe, who all stressed that Slovenia stood to enjoy extensive benefits from adopting the euro, although it must also be mindful of the challenges ahead.

Slovakia's Prime Minister Fico on the other hand showed humour during the central ceremony talking about the fact that in the future people might know the difference between Slovenia and Slovakia:

Slovenian Prime Minister Janez Jansa said the adoption of the euro was a big step for Slovenia, a small step for the European Monetary Union, as well as a step in the right direction at the right moment for the EU. One of the biggest high-level events Slovenia has ever hosted passed smoothly. This a good sign for Slovenia as the country prepares for the presidency of the EU in the first half of 2008.