Getting to grips with the E.U's blueprint.... or not

It's one of the biggest challenges facing the European Union: the new European Constitution. And both existing and new EU members are in Rome this weekend slugging it out over issues such as how to appoint a European President, or a foreign minister, and voting rights for commissioners. But judging by the citizens of Bratislava, the people of Central Europe know little about their constitution. 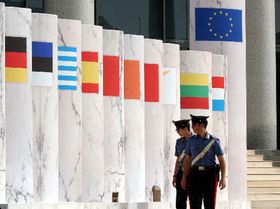 Rome, photo: CTK The anthem of the European Union recorded in this arrangement sounds differently. So does the debate on the future of the European Constitution in Bratislava on a cloudy day of October. People go on with their daily routine. The abstract notions of qualified majority and one commissioner-one country don't seem to bother them at all.

VOICE 1: "I think almost nothing except for the problems with the beginning of the Constitution but I don't care about the European constitution so I wouldn't be to much interested" VOICE 2: "I think it is a good idea" VOICE 3: "it's not necessary because every state has its own constitution"

The local press has tried to stir some debate on how Slovakia should regard its participation at the Intergovernmental conference in Rome as the first major occasion to make its voice heard in the EU. However, journalists have stumbled on the lack of clear information. The government has debated its position on the draft EU constitution till the last minute. Therefore it did not have time to explain to ordinary people what the whole story was about. The head of the EU delegation to Slovakia, Eric van der Linden, has a hard time trying to say how the government could get its citizens more involved in important European issues other than the structural funds.

"The question of communication is so important because there may be fights or let's say difference in the opinions within the government, but the population doesn't really see the implications of these when there is no, in parallel, I would say a dynamic information campaign or communication strategy."

Slovaks do not have too many chances to understand how the voting system will work in the enlarged EU simply because the domestic debate on the draft constitution, as poor as it is, has focused on more populist issues like supporting the reference to Christianity in the preamble. But for Jan Figel', a Christian Democrat, who negotiated Slovakia's EU membership, the issue of Christianity gives a human touch to the abstract ideas in the constitution.

" Because it gives a spirit, a certain spirit, to the whole community and of course to the text, which is then legally binding, and in this text we believe that invocation of Christian roots and values in the history and future of Europe should be recognized."

The recent opinion polls show that Slovaks support the European Union even though it seems such a complicated idea to comprehend. They may support even the constitution as it will be agreed in Rome but if the EU fails to bring them the promised freedom and prosperity, it could have a growing number of euro-sceptics on its hands.