The inter-war years are generally seen as a golden age by many Czechs. The first Czechoslovak Republic, which was established in 1918, was one of the world's most successful democracies until its annexation by Nazi Germany in 1938. While the contributions of brilliant statesmen like Tomas Garrigue Masaryk and industrialists like Tomas Bata to the success of the First Republic are well documented, it is not so well known that Czechoslovakia at that time had a vibrant free press, which also did much to nurture the country's democratic system. One man who played a massive role in establishing this journalistic tradition in the 1930s is the legendary Czech man of letters Ferdinand Peroutka.

Born in Prague to a Czech-German family in 1895, Ferdinand Peroutka began working as a journalist in 1913 and later wrote for Lidove noviny. When an independent Czechoslovakia was founded after World War I, his cogent writing style and razor sharp humour meant he quickly became established as an important political commentator in the nascent democracy. Peroutka's profile increased even further when he established the popular weekly revue Pritomnost meaning "The Presence" in 1924.

New York-born Martin Jan Stransky is the grandson of Jaroslav Stransky, who published Lidove noviny and Pritomnost in the 1930s. He says Peroutka's keen mind made him a towering presence in both publications and one of the most influential intellectuals of that period:

"I would say that he is certainly the father of Czech journalism as far as the founding of the country is concerned. He was known both for his literary style and more importantly for his political insight and his wit. This combination particularly the fact that his opinions were structured, which weren't shots from the hip and were generally almost always right, turned him into Czechoslovakia's leading journalist."

Although Peroutka was closely associated with President Tomas Garrigue Masaryk (who even gave him money to set up Pritomnost), he still maintained a reputation for being a fiercely independent commentator who would invariably provide Czechs with balanced coverage of all the pertinent issues of that time. Martin Jan Stransky again:

"He fulfilled or maybe even established all the characteristics that we today view as the sort of stereotypes of a brilliant editor or editor-in-chief in the sense that he was uncompromising in terms of his literary style. As an editor, he was absolutely uncompromising when it came to the works that he would edit, both in terms of their content as well as in terms of who submitted them."

Besides publishing his own articles in Pritomnost, Peroutka also used contributions from the best Czech writers and journalists of that era, including Karel Capek, Milena Jesenska and Eduard Bass. He staunchly supported the ideas of democracy and the rule of law in his work, and he was vigilant in attacking anyone whom he thought threatened these basic values, regardless of their political persuasion.

As a firm advocate of the Czech democratic tradition, it is hardly surprising that he was arrested by the Germans shortly after the outbreak of the Second World War. Aware of his influence, the Nazi authorities offered to free Peroutka if he would agree to edit a collaborationist version of Pritomnost. When he flatly refused, they sent him to the Buchenwald concentration camp for the rest of the War, an experience that was to mark him for the rest of his life.

When he was finally released after the War in 1945, he re-established Pritomnost under the title "Dnesek" (meaning "Today"). Once again this journal was noted for its independence, particularly for the critical stance it took on post-War violence committed against the German minority - a point of view that was not hugely popular at that time. Like many others, however, Peroutka and Dnesek were a little naïve when it came to the Communist Party and failed to uncover its totalitarian ambitions until it was too late.

There was no place for a freethinking intellectual like Ferdinand Peroutka in Czechoslovakia after the communist putsch in 1948 and he emigrated shortly afterwards, eventually settling in New York where he was to remain in exile until his death in 1978.

Martin Jan Stransky's family also emigrated to New York after 1948, and he remembers meeting Peroutka at a number of social events for the exiled Czechoslovak community:

"He was a long lean silent, quiet man, who always had a pipe in his hand and who always took a corner seat. He would look at everyone in the room and say very little. Quite often very few people, if anyone would communicate with him during the evening or even if it was a social party, because he was such an authority and so respected while at the same time his manner was fairly stern. He wasn't necessarily an approachable person. He wasn't a smiling, jocular fellow who would go around slapping everyone's back. He was the thinking intellectual who sat in the corner and looked at people in the rooms. If he did happen to say something, then everyone would immediately stop talking. He was an immense authority. In his later years he had a toy poodle named Pixie, which was always on his lap and who became a permanent fixture. At the same time he also had a wonderful sense of humour."

While in exile, Ferdinand Peroutka was in charge of the Czech section of Radio Free Europe from 1951 to 1961, where his regular dispatches, which were sharply critical of the socialist authorities, were eagerly listened to by many Czechs. Naturally, he was despised by the Communist Party and his name and work were taboo for most of the communist era.

The years in exile took their toll on Peroutka and the situation in his beloved Czechoslovakia meant he was a sad and despondent man by the time he died.

Nevertheless, Martin Jan Stransky, remembers him still doggedly taking a journalistic interest in the world around him right up to his death:

"Even right to the end, he was always interested in what was going on in the world, much of which he was having trouble getting to grips with. He would get around this by inviting me once a month or once every so often to the only Czech restaurant in Manhattan at the time, where he would always have dumpling and fried eggs along with a Pilsner beer. He would always ask me to explain the Vietnam War to him and why people were protesting against it, how it was possible for people top listen to rock music and things like that. He was interested in things one wouldn't think he'd be interested in. Perhaps it was out of a sense of professional duty, because as a good journalist he knew that he needed to understand the culture of the day. But I'm not sure if he really wanted to understand it. I think he sort of felt that it was a professional obligation." Ferdinand Peroutka with Pixie, photo: CTK Nowadays, of course, the name Peroutka is no longer taboo. Some of his books are back in print and the timeless quality of his articles is seen as a benchmark for many contemporary Czech journalists. Even his magazine Pritomnost has also been relaunched as a bilingual Czech-English quarterly by Martin Jan Stransky.

Despite this rehabilitation, however, Stransky feels Peroutka's role in promoting democracy Czechoslovakia and using the press to defend democratic traditions has yet to be fully appreciated in this country:

"His legacy is absolutely alive today. His books can still be bought. He wrote a couple of seminal works analysing the building of the state and so on. Certainly many - if not most - good journalists today know who he was. At the same time, probably all bad journalists don't kow who he was, but this is probably the same in every culture. But this is probably the same in every culture. As to whether, he is truly appreciated, I would say absolutely not. That's because the people in this country still don't appreciate the pillars of democracy, including the power of the media. If this country and this part of Europe does move along, then probably around 35 years from now, i.e. 50 years from 1989 - as Masaryk said it takes at east 50 years for democracy to settle in - I think Peroutka's stature will be even greater than it is today. But at this point the appreciation of the man is certainly less than it would be in countries that are more stable and secure"

Anyone interested in checking out the current version of Pritomnost can visit its website at www.pritomnost.cz (in Czech) or www.new-presence.cz (in English).

In a speech at a Holocaust conference in 2015, President Miloš Zeman falsely claimed one of the nation’s most respected journalists… 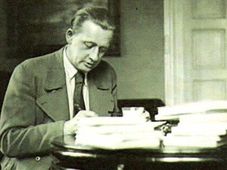