Gustav Frištenský – The legendary Czech strongman with a heart of gold

There is a Czech saying which goes “silný jako Frištenský”, or to be “as strong as Frištenský”. The trained butcher turned Greco-Roman wrestler became a legend in his country and his name remains embedded in popular memory and is also connected to streets, statues, gyms and even beer. 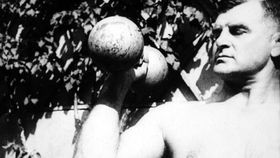 Gustav Frištenský, photo: Czech Television Whether it is Emil Zátopek, Jaromír Jágr or Petr Čech, the Czech Republic has produced a large number of highly successful athletes. Yet none of them were sacked right after winning a major tournament. This is precisely what happened to butcher Gustav Frištenský when he came home after winning the amateur European championships in Greco-Roman wrestling in Rotterdam in 1903. Legend has it that his German employer Herr Soffer greeted him with the words “I do not employ Czech thugs”.

Frištenský then went into wrestling full time and would end up winning almost 10,000 fights in his career.

Born in 1879 in the Central Bohemian village of Kamhajek, Gustav Frištenský was already carrying heavy sacks of seed at the age of 12. His parents wanted him to earn an honest living so sent him to train to be a blacksmith. However, at the age of 14 Frištenský badly burned his hand after one of the older apprentices played a prank on him with a red hot horseshoe, so he switched to being a butcher.

That was when he moved to train in Brno. While in the Moravian capital, he stayed with his uncle and the local Sokol branch founder Alois Choděra and it was with him that he started properly training with weights and on the trapeze. Soon he became too strong for his Sokol opponents and was advised to join the local athletic club Hellas in 1899. 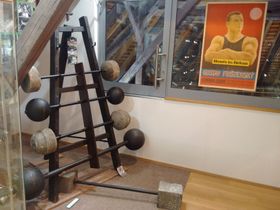 Frištenský's weights, photo: Petr Slinták / Czech Radio At first Frištenský combined work with evening trainings and Sunday fights. However, he was too good for his local opponents again and so he decided to travel at his own expense to Rotterdam in the Netherlands, where he became the first ever Czech to win the Greco-Roman wrestling European Championships. A recording of Frištenský speaking of this adventure survives in the Czech Radio archives.

“I secretly set out for Rotterdam. I took a three day holiday from work. I got there in at midnight and as I came onto the station I looked around. It was all dark and rainy and I could see half the street was a canal and half was a normal street. That is what Rotterdam is like, a harbour city. “So this conductor approaches me and starts speaking Dutch. I say: ‘I don’t understand’. Then he switches to German, which I understand a little. I tell him I am looking for a hotel and he took me to one.

“On the way, we pass lots of big posters and pictures of wrestlers. He sees me looking at them and asks if I am interested in wrestling. I say I am and that I will be taking part in the competition. He retorts: ‘Oh, but there are European champions here! The greatest is Eggenberger from Denmark. He has come with a large entourage…’”

Frištenský of course won the tournament and became a professional wrestler shortly after being fired from work. He even travelled to Russia, where he learned new techniques.

However, it was while fighting in the Moravian town of Litovel that he met his future wife, the daughter of the local beer brewer, Miroslava Ellederová. Two years later, in 1908, Frištenský Miroslava, nine years his junior, were married in Prague.

The two lived a happy life together, according one of his descendants Zdeňka Frištenská, who curates a special exhibit on the local hero at the Litovel Museum and recently spoke to Czech Radio’s Petr Slinták. 'The Hangman of Prague', photo: Petr Slinták / Czech Radio “He was in America between 1911 and 1913. Back then if you were someone you had to go to America. His wife Miroslava accompanied him on the trip and would perform traditional Haná region songs in her folk costume. The Czech minority there, which would go to attend his fights, absolutely loved it. According to letters and books which survive from that time, many remarked how happy they were to hear Czech spoken so far away from home.”

In 1919, shortly after the establishment of Czechoslovakia, the couple moved into their own house in Litovel, a villa on a street which bears his name today. Ten years later Frištenský also won the professional European wrestling championships which took place in Prague’s Lucerna.

The strongman trained with weights which lay around at his home in Litovel. Today visitors can see them in the local museum.

“We cannot say he had some sort of systemic training method. Whenever he passed these weights, he simply stopped and lifted them a few times, put them down again and went on. The weight of these dumbbells varies. What is interesting is that the heaviest one is hollow inside, so you could fill it up with water and it was heavier.”

His reputation was by now well established and it was around this time that the Czech Schwarzenegger also landed a couple of acting roles as an executioner and a blacksmith in Czechoslovak films, Ms Frištenská told Czech Radio.

“When Gustav was offered a role in movies it was at a time when cinema was only getting started. For example, although he was offered the role in the film Hangman of Prague and was its main protagonist, he had to co-finance it as well. We have found out that he had to pay for most of the film. 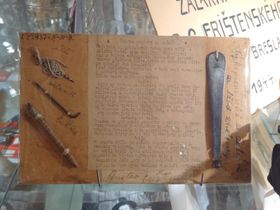 Frištenský's artifacts from Nazi prison, photo: Petr Slinták / Czech Radio “He was offered more roles, but he kindly declined, saying that he had to focus on wrestling and taking care of the family estate instead. To cite his own words: ‘I should not be focused on buffoonery in front of the cameras.’

“You have to realise that Greco-Roman wrestling was massively popular at that time, similar to hockey or football today. When you look at films of his fights from the time there were hundreds and even thousands of people in the audience.”

Although he was getting older Frištenský continued to wrestle professionally until the age of 66. However, he was personally affected by the Munich Agreement in 1938 between Germany and the other European great powers. His estate at Lužice u Šternberka was part of the Sudetenland and therefore confiscated by the Germans.

Gustav Frištenský financially supported the resistance to Nazi occupation during the Second World War. He was imprisoned and was in line to be sent to a concentration camp, but his wife managed to bribe the commander in charge and he ended up being released.

It is said that he donated 150,000 Czechoslovak crowns to widows of fallen policemen and received the Cross of Merit for his work in support of the liberation of his homeland. He also received his old estate back. However, it had already been ransacked by Red Army troops and was soon taken away again after the Communists seized power.

The worst hit for Frištenský came in 1947, when his beloved wife Miroslava suddenly died. The last years of his life were particularly tough for the wrestler. He had no pension for a long time, because he had counted on living off his savings, but these had now been all seized by the state. What little he did have left was then diluted through the infamous monetary reform of 1953. 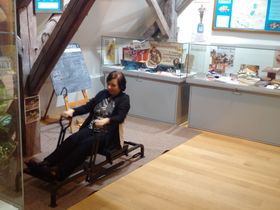 “Here we have a red velvet box in which there is a black leather belt. On the belt there were golden plates, which weighed about 1.5 kilograms altogether. After the war, when Gustav did not have anything, because it had all been taken from him, he would peel pieces away, so that he could buy food. Despite that, he wore his heart on his sleeve and helped where he could. He felt it was his duty to help those whom he felt needed it more than him.”

Gustav Frištenský died in 1957, 10 years after his beloved wife. A year before he let out his last breath he received the title Meritorious Champion of Sport.

His friend and admirer, the poet Petr Bezruč wrote the following words in his honour.

Retired forward Václav Nedomanský has become the second Czech to be inducted into ice hockey’s Hall of Fame. A member of the Czechoslovak world…

Sport has always played a big role in Czech life. At the time of the national revival in the 19th century, the Sokol gymnastics movement…