Under fire from Brussels, Czech PM resigns from government council for EU funds

Czech Prime Minister Andrej Babiš on Monday responded to criticism from Brussels over an alleged conflict of interest linked to EU funds paid to his former business conglomerate Agrofert. The prime minister said that in order to avoid any suspicion that he was influencing the distribution of EU funds in favour of his former business empire he would step down from a government council dealing with European Union subsidies. 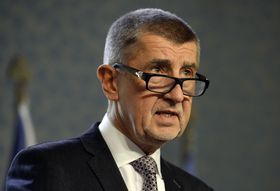 Andrej Babiš, photo: ČTK/Kateřina Šulová Ever since taking office the Czech prime minister has been dogged by problems linked to Agrofert, the multi-billion crown agro-chemical business conglomerate he founded and successfully ran before entering politics.

In addition to the fact that he is suspected of EU subsidy fraud in connection with one of the businesses in this conglomerate, the European Parliament has now pointed to what it calls an inherent conflict of interest in connection with the Agrofert conglomerate that is receiving EU subsidies. Although Babiš put Agrofert into trust funds in 2017 in order to comply with a strict new conflict of interest law approved by the Czech Parliament, his critics say he is still in control since the trusts are managed by family members and his lawyers. While Babiš is said to be fully in compliance with the Czech law on conflict of interest, this is not the case with a new EU legislation approved in August of this year.

The European Parliament recently called on the European Commission to suspend all EU funds to Agrofert until the matter has been satisfactorily resolved and Gunther Oettinger, commissioner for budget and human resources sent the Czech prime minister a letter setting out three options for him to avoid conflict of interests – either for him to definitively cut all ties to Agrofert, for EU subsidies to the group to be completely halted or to exclude himself from decisions affecting the conglomerate.

At a press briefing in Prague on Thursday, the prime minister said he had chosen to follow the third option.

“I will resign from the Council for Structural and Investment Funds without delay and will not take part in any government decisions linked to EU funds. A letter has now been sent to Commissioner Oettinger stating this line of action, which is one of the options he himself recommended. That, together with assurances that all ministries are ready and willing to cooperate in this matter.” Photo: Filip Jandourek The prime minister also stressed that since the new EU law came into force in August there had not been a single meeting of the government Council for Structural and Investment Funds.

The prime minister’s only coalition partner, the Social Democrats, indicated they were satisfied with the solution. Deputy Prime Minister Jan Hamáček:

“As regards the call from the European Commission I believe we have reacted adequately to the matter.”

However, the prime minister’s critics at home are not convinced. The opposition Civic Democrats say that the prime minister’s response to Brussels only confirms that he himself is aware of a conflict of interests and point not only to the damage to the country’s good name abroad but to the amount of time that the government and parliament have been forced to devote to the matter. With an investigation into the Stork’s Nest affair still underway, it is clear even now that the saga pertaining to Agrofert and EU subsidies is far from over.