The 52nd Karlovy Vary International Film Festival kicked off with a glitzy opening ceremony at the weekend. Speaking on the red carpet, Hollywood star Uma Thurman reflected on some of her best loved work, while Casey Affleck highlighted the significance of such festivals. Ian Willoughby was at the ceremony and sent this report. 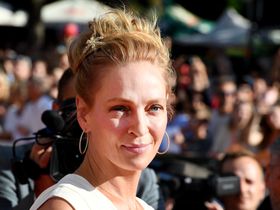 “You know, there’s a certain magic in the air and sometimes it catches, sometimes you have the right piece of material. I think that Kill Bill hit a nerve of female empowerment at the right time. I think there’s been a progression of films after that that have been really fantastic and have supported women as being strong and intense. So I’m always going to be proud of having participated in that.”

Uma Thurman received Karlovy Vary’s President’s Award at Friday’s opening – and said that for her getting prizes never gets old.

“We do these things to sort of remind ourselves to encourage each other. And whenever I receive any recognition for something I actually just feel very moved and encouraged and supported to carry on. So as I am carrying on [laughs], it’s very nice – it’s an honour.” 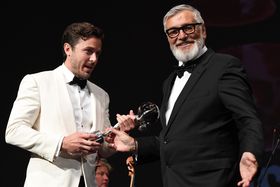 Casey Affleck and Jiří Bartoška, photo: ČTK Also receiving the festival’s President’s Award was Casey Affleck, who picked up the Best Actor Oscar this year for his performance in Manchester by the Sea.

The US actor likes to alternate between big budget movies and small independent films and in Karlovy Vary introduced one of the latter, his latest work A Ghost Story.

Affleck told the 1,200 or so guests at the gala opening that artists need to stick to their guns.

“Anyone who works in the arts, as almost all of us do here, I guess, knows that you have to sort of resign yourself to doing things that probably most people will never see, and they won’t like as much as you do. And that’s OK – that means you’re doing the right thing with your life, probably. So an event like this is really a wonderful opportunity to share some of those things that many people never see, and to recognise one another’s work and to celebrate a little bit. And I’m very happy to be here and very proud to be in your company.”