This autumn, the Czech government started another national campaign aimed at combating xenophobia and racism. Very much like last year's campaign, Tolerance 2003 focuses on two areas - delivering free books on ethnic minorities to public libraries and promoting discussion among students on racial stereotypes. Under what's called the Tolerance Ride, ethnically mixed teams of foreigners, refugees, asylum seekers, the Roma - as well as members of the majority population - travel around the country to share their experiences, customs and cultures with secondary school students. Dita Asiedu spoke to the Czech Republic's Human Rights Commissioner Jan Jarab:

"Well, of course the stereotypes mainly concern the Roma and there are also stereotypes, which concern Ukrainians, Africans, and Asians, although the Africans and Asians were not that much part of our society so we don't have any historically fixed stereotypes and roles. But there is a kind of a general mistrust. Czechs start out in almost every situation with deep scepticism. It has served them well under the dictatorship but towards foreigners, migrants, asylum seekers and minorities, it can be seen as cold and hostile. When the people then react in kind, then the Czech public says 'we told you, we knew it, the other people are the problem. We didn't do anything against them but stare and not greet them and now they are making a problem.' So, it is this closed set of mind, which we see not just in relation to minorities or foreigners but in relation to all things new."

But wouldn't you say that most Czechs with stereotypes are older?

"Surely. I'm afraid that it is far more difficult to influence middle-aged and older people and even to find a mechanism to do it, to get them into a group where they could be addressed. So, one of the possibilities, of course, is through the public libraries. As we know, who goes to public libraries are the very young and the very old. We're quite proud of the part of the project that concerns public libraries because it is something to stay."

So would you say that the main reason why people here in the Czech Republic have stereotypes is not because they are racist but simply because there is a lack of information? 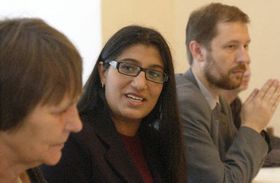 From left: Dana Nemcova, Monika Mihalickova, Jan Jarab, photo: CTK "I think that there are many people in this society who are racist. But that racism is not the root cause of Czech xenophobia as such. The root cause is a kind of closed mind, the deep provincialism of our people, which is linked to simply having very superficial knowledge or ideas of what the other people are like."