The temperature swings that the Czech Republic - and indeed most of Europe are now experiencing - are believed to be the worst in close to half a century. A thirty degree drop in temperatures and snow showers have gladdened the hearts of winter sports lovers but many farmers, who are still recovering from last year's devastating floods, say this may be the end of their livelihood. Photo: CTK Never has the phrase "as changeable as April weather" seemed so apt. While last week day temperatures hit the twenty-degree mark, nighttime lows are presently reaching minus ten degrees and if meteorologists are right then next weekend day temperatures should climb back to plus 23 degrees Celsius. While for most people this is a temporary nuisance - for farmers it could mean a great deal more. The head of the Agrarian Chamber Vaclav Hlavacek explains:

"The farming sector is in a deep crisis which started in the first quarter of 2002 and has steadily grown worse mainly due to unfavorable weather conditions. Many farmers are heavily indebted as a result of last years' floods - and a great deal depended on this year's early harvest. For many of them this will be the end of the road." 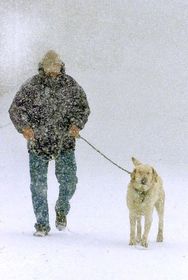 Photo: CTK In every way this winter is the worst that farmers remember. In most parts of the country the earth was heavily saturated with water from the floods and a succession of freezes and thaws destroyed entire fields of early crops. Farmers are simply re-ploughing them into the earth before starting anew. But many don't have the funds for new seeds and in some cases they are hard to obtain at this time of year. The worst hit are the fields of rape seed, barley and wheat.

The Agrarian Chamber reports that the entire country has been hit in this respect - some farmers report that 80 percent of their harvest has rotted in the fields, in some cases it is 50 %, the luckier ones report 10 % losses. Fruit farmers are spraying their orchards with water which instantly freezes on the trees and gives them some degree of protection. Sheep farms report that lambs are being born in snowdrifts - and there are some losses - when farmers fail to get them into the warmth fast enough. But that, at least, is something that farmers can influence and they are keeping 24 hour vigils watching their flocks which are bred out in the open all year round.

The Agrarian Chamber has called on the state for help and the government is to debate the issue once an overall estimate of the damage has been made. However, even in the best of circumstances, farmers cannot hope for a great deal since emergency funds are already stretched to the limit by last year's devastating floods.