Social Democrats to foil opposition attempt to bring down the government

After more than a week of political uncertainty regarding the fate of the Czech government, the junior partner in the ruling coalition, the Social Democrats, announced they would allow the government to survive a motion of no-confidence on Friday by abstaining from the vote. The decision was attacked by the opposition parties as “cowardly” and “self-serving”. 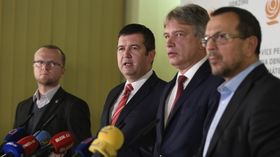 Jan Hamáček (center), photo: ČTK/Ondřej Deml When the Stork’s Nest scandal, in which the prime minister is suspected of EU subsidy fraud, acquired a new dimension last week involving the alleged kidnapping of his son to Crimea so that he could not testify against his father, the fate of the Babiš cabinet hung in the balance. The opposition parties gathered enough support for a no-confidence motion in the government and ANO’s junior coalition partner –the Social Democrats – mulled their next step –whether to bring down the government and seal their own fate or ride-out the storm with the embattled prime minister and accept co-responsibility for the worst scandal in Czech politics since 1989.

Following heated debate inside the party, which is deeply divided over its presence in this government, party leader Jan Hamáček said the Social Democrats would leave the assembly hall during the no-confidence vote, thereby indirectly supporting the administration.

“The prime minister’s personal problems are burdening the government and we lobbied hard for a change of prime minister, but the ANO party is categorically against that. So by abstaining from the vote we are acknowledging the problem, but our priority is to continue in this government and to implement our policy program.”

Mr. Hamáček said the decision had been made in view of two key developments over the past few days –the efforts of the populist Freedom and Direct Democracy Party to strike a deal with ANO with the aim of replacing the Social Democrats in the coalition government and President Miloš Zeman’s announcement that, should the government fall, he would once again task Andrej Babis with forming a new government. Hamáček noted that, with this in mind, it was obvious that a vote of no-confidence would only harm the Social Democrats and the only way to bring about a change of prime minister was via a motion to dissolve parliament and hold early elections which his party was ready to support if 120 votes could be found for such a solution in the lower house. 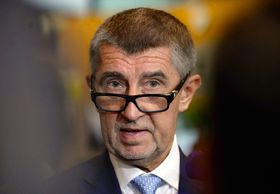 Andrej Babiš, photo: ČTK/Jakub Dospiva The news that Andrej Babiš would remain in office despite the scandal surrounding him has brought the wrath of the opposition down on the heads of the Social Democrats. They are being labelled cowardly, self-serving and insincere, since few people believe they would be ready to face early elections in view of their low public support ratings. Prime Minister Babiš, whose future as head of government is once again secure, also ridiculed the Social Democrats stand in not actively supporting their own ministers and said he saw no point in early elections.

Despite the foregone conclusion of the planned vote of no-confidence, the motion will go ahead in the lower house on Friday, and the opposition is preparing to lambast not just the prime minister but the Social Democrats as well. 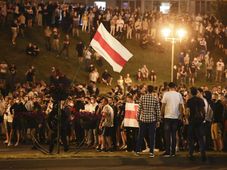