A Czech-American team of scientists recently published findings in the prestigious journal Nature Geoscience, after discovering how unique landforms such as the Czech Republic’s Pravčice Arch are created and how they withstand collapse. 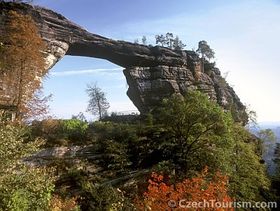 Pravčice Arch, photo: CzechTourism Pravčice Arch, located in an area known as Bohemian Switzerland, is nothing less than a natural wonder: spanning 26.5 metres, 21 metres above the ground, it is the largest sandstone arch in Europe. Countless visitors have seen the site in awe and countless more have contemplated exactly how such natural arches are formed and what keeps them from collapsing. Not long ago, a Czech-American science team provided an answer, recreating, in the lab, similar conditions which – in a fraction of the time, a mere hour-and-a-half – saw the creation of similar geological formations on a small scale.

Using sandstone blocks under pressure in water, they eroded the material until the vertical stress increased, putting pressure on the remainder of the arch. As stress from the load grew, the sandstone, a granular sediment, reached a critical point, the scientists said, and paradoxically instead of falling apart behaved “like a rock-like material”. The greater the stress, the greater resistance to erosion, explaining why the stunning structure has stood majestically for so long. 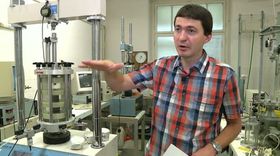 David Mašín, photo: ČT24 David Mašín, of Charles University’s Faculty of Science, was one of the researchers involved:

“The most important thing is that you have plates from both sides putting pressure on the block and then areas which are free. In a little while, we created our own Pravčice Arch, which withstood additional erosion. But when we removed the stress on it, it immediately collapsed.”

The deceptively simple find, applicable to geological formations worldwide, came as a surprise. One would expect with greater pressure that the sandstone arch would quickly crumble in the water; the opposite was confirmed in the lab. Scientist David Mašín again: Photo: ČT24 “If you make a mud pie or sand castle, then apply sufficient pressure from the top, you expect it to collapse. Here, the opposite was the case: when we put stress on the material, it became much more hard-set and could hold many times its weight.”

In nature, the real Pravčice Arch is affected continually by the weather and specialists regularly test the arch for stability and overall safety. Each year, the top portion or slab shifts by up to three milimetres; more could reportedly be dangerous. One thing preserving its longevity is that tourists can only look from afar: the top of the arch has been off-limits to hikers for the last 30 years. Conservationists in the National Park Bohemian Switzerland in north of the country are busy these days collecting wild pears. While… 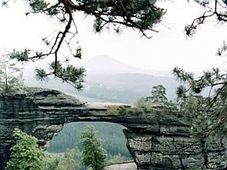 It is one of nature’s marvels – a gate of sandstone created through millions of years of erosion. The Pravčice Gate near the Czech-Saxony border… 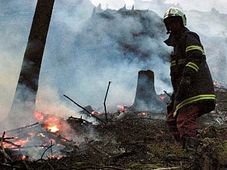 After three days and four nights, fire fighters say they have managed to put out a forest fire in the Ceske Svycarsko (or Bohemian…