As well as the historic monuments, visitors to Prague might be struck by the busy three and four lane highway in both directions that dissects the city centre and complicates access to many landmarks and cultural sites. The city has called in the studio of a world famous Danish architect to suggest how the so-called Magistrale can be tamed and transformed. 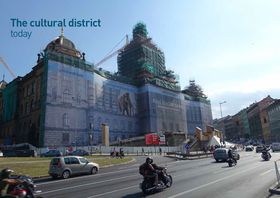 Prague’s north-south motorway, photo: Gehl architects, source: Czech Radio Some of the estimated 100,000 cars using Prague’s north-south motorway or Magistrála every day. Constructed in the 1970s, there’s little argument that this is a noisy, polluting blight on the surrounding areas and an artificial divide between districts which were previously part of a coherent whole. Along parts of the busy road, such as near Prague’s main rail station, there is not even a pavement for pedestrians to walk or sufficient crossings or underpasses to get across.

The Magistrála’s blight is most evident at the top of Wenceslas Square where the imposing National Museum and monument commemorating Jan Palach is cut off from the rest. Czech-American Jan Mayer, who has his offices nearby, gave his take on how to solve the situation.

"This should be closed, put back to the original context before it was destroyed by the highway, and the oncoming traffic that goes up the hill here should traverse the other lane behind the old parliament building as an elevated with an over and under, behind the museum, and then re-join the original route up the street here so that this can be completely closed.ʺ 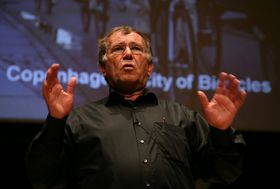 Jan Gehl, photo: Gene Driskell, CC BY-SA 2.0 Other solutions have been suggested in the past, such as putting motorway sections underground through some of the centre or enclosing them with an above ground tunnel. But Prague City Council is now mulling a wide ranging study by the studio of Danish architect Jan Gehl which combines some radical suggestions and some more manageable first steps to deal with the problem. Gehl and his team have previously worked on transforming urban environments in Moscow, New York, Vienna, and London. But they admit tackling the Prague Magistrale has been one of the biggest challenges so far.

The Gehl concept combines some early step by step moves which might tackle some of the immediate blight as well as long term measures that could transform the motorway into more of a boulevard. Petra Kolínská is a deputy mayor at Prague City Hall and says the architects’ proposals have helped give a new perspective on how the motorway can be transformed. She says some of the early steps could seek just to make the immediate environment more inviting and liveable. Vision for 2050, photo: Gehl architects, source: Czech Radio ʺThere could be interesting designer street furniture, benches, mobile cafes. We should resolve what to do with the green spaces and if people can go on them or not and to make the environment cleaner so that people would actually want to stay around there."

Some of the more ambitious and costly suggestions include demolishing part of the existing Magistrála which is built on pillars after the main train station. Kolínská says she would like to see the city decide within a few months about the whole concept looking forward to 2050. But she says the green light may only be given for work to start on some of the early specific steps to see how they pan out.

Jan Kasl: In ‘89 people hoped for hundreds of unique new buildings in Prague

Prague has obviously changed enormously over the last 30 years. But what have been the city’s most, and least, impressive construction… Up to 25,000 people could be living in Prague 7‘s Bubny neighbourhood, at least according to a study commissioned by Prague City Hall,… 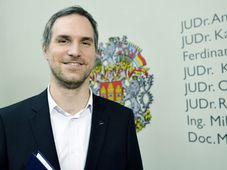