After seven months of long-drawn-out debates on forming a government, Czech politicians came up with a new stunt to revive the public's interest in the deadlocked political scene. On Wednesday, TV crews were invited to a debate between representatives of the three-party coalition in the new government and the Social Democrats about support for the government in an upcoming confidence vote. Jiri Paroubek, photo: CTK Commentators have called it a reality show, some even a charade. In a live broadcast on Czech TV's news channel, nine top politicians held discussions for an hour on Wednesday. But the meeting did not bring any surprises. As expected, Social Democrat chairman Jiri Paroubek confirmed his party would neither back nor tolerate the centre-right government of Prime Minister Mirek Topolanek. Radio Prague asked political analyst Petr Just whether Wednesday's televised talks could be taken seriously.

"In my opinion it was nothing but a show, a PR event that was called by Mr Paroubek in order to present himself as a person who is open, who wants to negotiate transparently and to show that Mr Topolanek is somebody who is trying to hide the negotiations, who is trying to do some backstage negotiations, and therefore Mr Paroubek would like to present himself as a better person in comparison to Mr Topolanek."

But considering the sheer nature of politics, is transparency and openness something that such "public" negotiations can offer?

"I think it was artificial because if these negotiations are open, if they are even broadcast live by public TV, then you have to expect that the actors, the participants of the negotiations, will not uncover everything they came with. So I think that the form of the negotiation - that it was open and broadcast live - kept many topics because the participants wouldn't like to open them in public. So I think it was more general information. We had expected what the opinions of each party would be, so there was nothing interesting in that from the point of content." 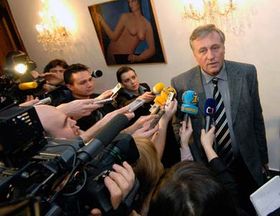 Mirek Topolanek, photo: CTK Political and media commentators - those who actually took the time to watch Wednesday's broadcast - have agreed it was nothing but a publicity stunt. But Petr Just believes it is questionable whether the public actually buys such gimmicks.

"Generally, we can see in a long-term perspective that the public is very exhausted and disgusted by politics. So I think that showing live negotiations is something that can maybe even worsen the situation and that could even decrease the level of public support and public approval of politics, politicians and political parties."

Wednesday's debate on support for the government of Mirek Topolanek produced no clear winner, but as one of its participants said after the broadcast the biggest loser was the Czech Republic.

Many tributes have been paid Jan Stráský, the last prime minister of Czechoslovakia, who has died at the age of 78. Stráský was a founding member…