Architect Jan Hird Pokorny is a legend of the Czech émigré community in New York City, where he has been living and working since 1940. A former professor of architecture and preservation studies at Columbia University, he was instrumental in saving countless historic buildings in his adoptive homeland from destruction: among them, the Bohemia National Hall, once the centre of New York's thriving, Czech émigré community. This Tuesday, Prof. Pokorny--at 90 years old still considered a modern architect--was awarded the honorary title of doctor honoris causa from the Czech Technical University, his first alma mater. This week, he is also to receive a lifetime achievement award from the Czech union of architects. Brian Kenety caught up with Prof. Pokorny at the Prague opening of a retrospective of a half century of his work. 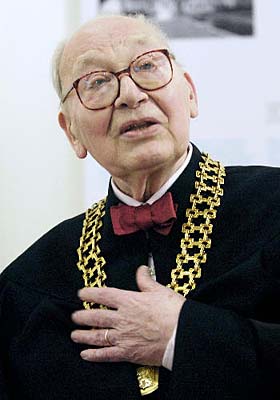 Jan Hird Pokorny, photo: CTK RP: You are a modern architect but also a 'pamatkar' - a historical preservationist...

RP: Wearing those 'two hats'--of being a modern architect and a historical preservationist--which projects, would you say, that are on display here today, best meet those two conditions?

"Well, the South Street Seaport, in a way... The interior for the building at Columbia University is a good example: the inside is modern, the outside is historically restored. So that's a very good example."

RP: One preservation battle that must have been very hard for you to lose was over the destruction of the house of Czech composer Antonin Dvorak in 1991.

"Yes, well the Dvorak house belonged to a hospital nearby and they didn't consider the Dvorak house a cultural landmark - to them it was a piece of real estate - and they were planning on tearing it down... The system of making something a historic landmark is, usually, that the community participate, the community gives its opinion, then it comes to the landmarks commission and the landmarks commission decides if it is worthwhile, or correct, to make it a landmark... and then when it makes it a landmark - that's it: that's the law. But there is an exception: the city council has the right to contradict it. And it had never happened— except with that Dvorak house. The city landmarks commission was, unfortunately, affected or influenced by some clever lawyers, who convinced some of the city councilors to vote against it. So we lost it."

RP: I imagine you've won just about every architectural prize that America, or New York, can give out - and quite a few in the Czech Republic -- what does this exhibit here mean to you, personally?

"Well, you know, as you go from project to project, you don't think about how it's going to be received. You just do your job and then you go to the next one. It takes a lot of energy and you don't look back all the time. But then when you are reminded - and this is a big reminder, a wonderful reminder - that we really did quite a lot of good work - and so that's gratifying."

A retrospective of architect Jan Hird Pokorny's work will be on display at the Jaroslav Fragner Gallery in Prague until June 6th. For information, please see the gallery webpage: www.gjf.cz 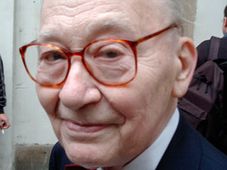 A memorial is being held in New York on Thursday for Jan Hird Pokorny, a renowned Czech-born architect who died last month at the age…

Czech émigré architects from around the world exhibited in Prague

This week hundreds of Czech émigrés from all corners of the globe have gathered in Prague for the "Week of Czechs Abroad". They will…