The Czech Republic's seven-month long government crisis may be coming to an end. The balance of power in the lower house, which has been deadlocked since the June general elections, swung in favor of the centre right coalition government on Tuesday. The prime minister announced that he had made a tolerance-deal with two rebel Social Democrat deputies, which would enable his cabinet to win Friday's crucial confidence vote in Parliament. 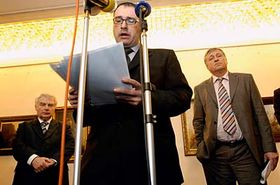 Milos Melcak, Michal Pohanka, Mirek Topolanek, photo: CTK Flanked by the two rebel deputies, Prime Minister Mirek Topolanek told journalists that in return for certain policy programme concessions deputies Milos Melcak and Michal Pohanka had agreed to abstain from Friday's confidence vote. After months of futile negotiations and one failed attempt at forming a government the embattled prime minister has finally been given the green light. His centre-right cabinet made up of the Civic Democrats, Christian Democrats and the Green Party looks set to win Friday's confidence vote.

But will this give the country a stable government capable of pushing through its pro-reform policy programme of tax changes, public spending cuts, and health and pension reforms? Political analysts are skeptical. The two left-wing rebels have only agreed to tolerate the centre right cabinet in order to bring the country's "prolonged political agony to an end." They did not promise to support the government in future votes. 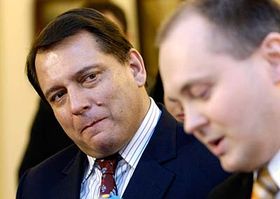 Jiri Paroubek, photo: CTK However if the centre right-cabinet finds itself unable to fulfill its reform programme it has the option to link any reform bill to a new confidence vote - thereby bringing down the government and opening the way to early elections. Winning Friday's confidence vote would thus mean one thing - Social Democrat leader Jiri Paroubek would not get the "third" attempt to form a government which he has hankered for.

Mr. Paroubek on Tuesday responded with anger to the news, calling the two deputies traitors and saying that the deal smacked of corruption. The government crisis may soon be over but whatever lies ahead for the Czech Republic it is unlikely to be a time of stability.