Seven months after the country's general elections the Czech Republic is still without a stable government, the lower house is paralyzed by the even division of power between left and right parties and the speaker of the lower chamber is about to resign from office. At the present time it seems that the one institution which remains a beacon of stability is the Office of the President. After four years in office, President Vaclav Klaus has a 67 percent popularity rating and the majority of Czechs would like to see him re-elected in next year's presidential elections. 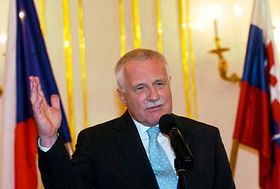 President Vaclav Klaus, photo: CTK One of the key figures in the seven-month-long search for a new government is President Vaclav Klaus, yet its failure to materialize has cost him none of his popularity. Opinion surveys consistently show him as the most trustworthy political figure in the Czech Republic - and the latest one out suggests that 67 percent of Czechs would like to see him re-elected in next year's presidential elections. The fact that Vaclav Klaus is the founder of the right-wing Civic Democratic Party - and insists that he will always be a conservative at heart - has, surprisingly enough, not harmed him. 54 percent of left-wing voters say they want him for president. So what's at the heart of Mr. Klaus' popularity with the public? Political analyst Jiri Pehe:

But he is also the founder of the Civic Democratic Party - has he managed to distance himself from that?

"I think Vaclav Klaus has been ambivalent about distancing himself from the Civic Democratic Party. On the one hand, he often emphasizes that he cannot separate himself from the party and that he is and will always be a politician with a conservative outlook, on the other hand in the last few months or weeks he has shown that when it comes to government negotiations he can get tough even on his own party and this may be something that helped him as far as public opinion is concerned. He has shown that he is really not just a Civic Democrat but a president who stands above political parties."

The high rate of public support would be great news for Mr. Klaus - were it not for the fact that the public will not be electing the next president. Under the Czech Constitution the president is elected by Parliament and his re-election could thus become a highly politicized issue. 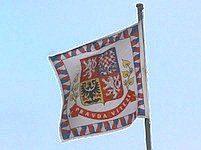 There are those who claim that in the search for a new government Mr. Klaus is trying to secure a coalition which would agree to get him re-elected. They see this as the only plausible explanation for why the right-wing Mr. Klaus would be happy to accept a grand coalition. Mr. Klaus himself has strongly rejected that idea, insisting that he only wants a stable government which a coalition with the smaller parties is not able to ensure.

Although the present centre-right coalition originally said it would try to push through direct presidential elections, it has since watered down that statement. So, it seems fairly certain that the next head of state will be elected by Parliament - and if there is anything playing in Vaclav Klaus favour it is the fact that there is no rival on the horizon. Even those respondents who claimed they did not want him re-elected were not able to say who should succeed him as head of state.

Poll: Most Czechs back change to single-day voting

At present elections in the Czech Republic usually take place across two days. That looks likely to end, however, with the Ministry…

The ideal Czech president? Experienced, assertive but diplomatic, and non-partisan