President appoints centre-right government, but can it survive confidence vote?

On Tuesday politicians, dignitaries and journalists gathered at Prague Castle to witness yet another change of guard. At midday on Tuesday President Vaclav Klaus appointed a new centre-right government made up of the Civic Democrats, the Christian Democrats and the Green Party. 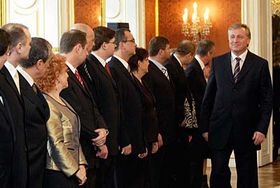 Photo: CTK The three party coalition is Prime Minister Topolanek's second attempt at forming a government since the last general elections produced a deadlock in the lower house seven months ago. The first, a minority Civic Democrat cabinet, failed to win a confidence vote in the lower house in October. His second cabinet now has 30 days in which to ask the lower house for a vote of confidence. But will it fare any better that the first? A question we put to political analyst Petr Just.

"We have to take into account that this government is officially supported only by 100 deputies - that is by half of the lower house - so if we are considering its chances they would be 50/50. However I would still be a reserved optimist - very reserved - because of the recent statements of the founder of the Social Democratic Party Milose Zeman who said that under the circumstances the Social Democrats should at least enter into negotiations on possible support for or tolerance of this government. So I would increase the government's chances of winning the confidence vote to 50.1 percent. I would say that I am mildly optimistic because of Milos Zeman's statements." 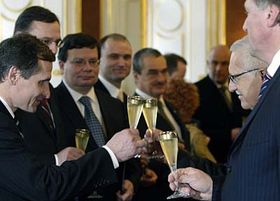 Photo: CTK But the Social Democrat leader, Mr. Paroubek, has ruled out any talks on tolerating or supporting this government so where would the support come from - party rebels?

"That might well be the case. Deputies who were elected for the Social Democratic Party but who no longer agree with its policy might chose to absent themselves during the confidence vote. But even so, I think there still is a chance that Mr. Paroubek will talk to Mr. Topolanek - either officially or informally. Right now everything is open and the situation is quite unpredictable -as we have witnessed in the past seven months. So I think we should wait for a final statement and maybe we should wait for the confidence vote itself because with all probability those party rebels will make known their stand on the day itself." 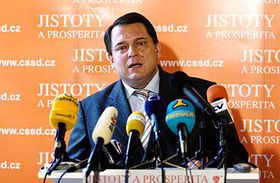 "That is a different question altogether - and much more complicated. Because even if some Social Democrats decide to tolerate or support the government I think they would not be prepared to support this government's reforms. So implementing reforms would be a much harder task for this government and that might be the end of the road for them. If I remember well, Mr. Topolanek promised that they would link each reform bill with a confidence vote and according to our constitution if the cabinet links a confidence vote to a certain bill - and that bill is not passed within 30 days - then early elections take place. So I think this could be a step to early elections - which are still a priority for the Civic Democratic Party."