Over 30 Prague schools scoured for bomb after anonymous threat

Over 30 church schools in Prague closed for the day on Friday after getting an anonymous bomb threat. Police and bomb disposal experts have been scouring the schools and premises and an intensive search is on for the culprit. It is the biggest security operation in the Czech capital since last September when there were fears of a possible terrorist attack against Jewish targets. 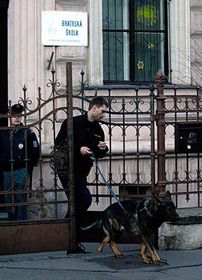 Photo: CTK The threat to blow up the city's church schools was made by letter. It is not yet clear to whom the letter was sent but the respective schools were alerted late Thursday and the police went into action. Police units with sniffer dogs and bomb disposal experts combed one schools after another while an intensive search went underway for the writer of the anonymous letter.

What is crucial is that the matter is not being investigated as one of the many hoax calls that are made on a daily basis- it is being investigated as a planned terrorist attack for which the perpetrator could get 5 to 15 years in jail. In an interview for Czech Radio police president Vladislav Husak said that the way in which the threat had been made showed signs that the writer "knew what he was talking about". With thousands of children involved - the police are taking no chances. Security has been stepped up around every church school in the country and the state of high alert is likely to remain in place throughout the day. 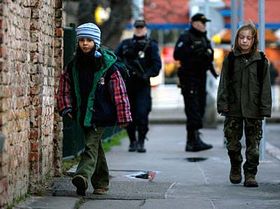 Photo: CTK Meanwhile, school staff have been doing their utmost to cooperate with the police and prevent the spread of panic. During the night hours they contacted the children's parents to inform them about the situation and ask them to keep their children at home the next day. Some schools cancelled classes altogether, others prepared outdoor programmes - such as a visit to the zoo or some museum to keep the children amused. Although some schools have already been given the all-clear, they are not taking any chances as far as the children are concerned. There's a skeleton staff operating in each one - taking calls, answering questions, reassuring parents - and basically waiting to see how the situation develops. Everyone is hoping that the police will soon make headway on the case and enable thousands of children to return to their classrooms without fear of what the day may bring. 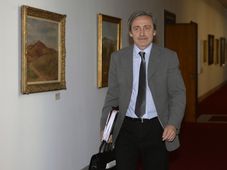 Molotov cocktails were thrown at the Prague home of Czech Defence Minister Martin Stropnický at the weekend. The country’s defence…

Police on alert after shooting threat directed at Czech schools

Police have warned Czech schools of a possible shooting attack after the sending of a threat of that nature via social media, the Czech…

The police have arrested a man suspected of making hoax bomb threats in Prague. The caller said he had placed explosives in the Anděl…