On Tuesday the thirteenth century stone bridge in the southern Bohemian town of Pisek was reopened to pedestrians. The 111-metre long bridge is famous as the oldest remaining bridge in the Czech Republic, and for the statues of saints and the crucifixion of Christ which decorate it. However, during the disastrous floods in the Czech Republic last year, the bridge became known for something else as well: it was one of the most badly damaged cultural monuments in the country. 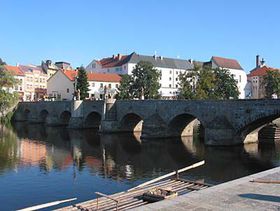 Stone bridge in the southern Bohemian town of Pisek The citizens of Pisek are now rejoicing at the reopening of their stone bridge, only seven months after their town's most famous symbol was severely damaged by the floods. One of the many people who assisted in the clean up of Pisek after the floods is Peter Moree, a teacher at Prague's Protestant Theological Faculty. I asked him what the stone bridge looked like during the floods of last August:

"I saw it a few days after the flooding of Pisek, and I was pretty shocked by it because I hadn't seen it before. Of course it's a very famous bridge, a kind of a small copy - and an older version - of Charles Bridge. It was basically submerged, none of the statues could be seen, and bigger parts of the side of the bridge had been swept away."

Among those who have supported efforts to restore Pisek's stone bridge are former Czech president Vaclav Havel and pop star Karel Gott, both of whom contributed almost 10,000 euros each to the restoration funds. And one of the persons most involved in these efforts is the preservationist Jiri Hladky, from the State Institute for the Preservation of Historic Monuments, who has supervised the stone bridge's restoration.

"We had to wait for the water level to drop and then we started investigating whether the stone blocks that had fallen off the railing were under the bridge at all, and how far they were in the Otava River. The divers found out they were there and then it was only a matter of technical work. We used small water dredgers - the kind on spider legs - to move the blocks closer to the bridge and the divers helped to pile them under the water. Then a crane came and pulled the blocks back onto the bridge. They were stored so that they could be used later for bricking up the railing that had collapsed."

Since its reopening to pedestrians on Tuesday, the stone bridge has again been performing its chief function of connecting the two sides of the town centre. It is expected that the bridge will be fully restored by April, when it will be able to fulfil in all its glory its other role as one of Pisek's most famous tourist attractions. 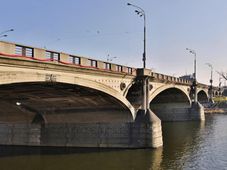 Part of one of Prague’s most important bridges is in a calamitous state and must be knocked down. The overpass by the city’s Vltavská…