The three parties in the feuding Czech coalition have raised hopes that they will re-unite and form a new government under a different PM. After months of bickering, triggered by a scandal involving PM Stanislav Gross' private finances, the Social Democrats, the Christian Democrats and the Freedom Union appear to have found an acceptable way of easing the embattled PM out of office and getting back to work with pretty much the same team of ministers as before. 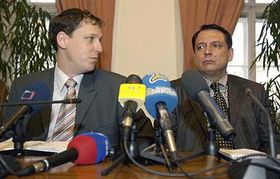 Stanislav Gross and Jiri Paroubek, photo: CTK Daniela Lazarova has been following developments. Daniela, assuming that this attempt to resolve the crisis will really work out, why did it take three months to replace the prime minister - which appears to be what it has all boiled down to?

"Yes, it does seem to have boiled down to that. Of course, there will be changes in some ministerial posts, but the new Cabinet will be very similar to the old one. From what we know, the two smaller parties in government - the Christian Democrats and Freedom Union - don't appear to be inclined to make any personnel changes. So any changes made will probably affect Social Democrat ministers. But to answer your question about why it took so long - basically, the last three months were a battle of wills between the coalition partners, in particular between the Social Democrats and the Christian Democratic Party. They wasted a lot of time arguing over who had caused this crisis in the first place, the Social Democrats seemed to be struggling to save face and with each new demand and ultimatum it became more difficult for the parties to reach agreement. However, at the end of the day, the old survival instinct seems to have won out and they have finally shown themselves ready to make certain concessions. Ironically, from where the public stands the end result is pretty much the same government with a new prime minister.

Speaking of the new prime minister - who will it be? 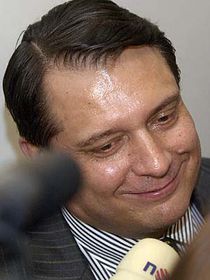 Jiri Paroubek, photo: CTK "The man whom the Social Democrats have handpicked for the post is Jiri Paroubek, deputy chairman of the Social Democrats, and currently Regional Development Minister. His main credentials appear to be a highly pragmatic attitude and the ability to communicate and reach consensus, which he will be doing a lot of in the coming months, because the future PM will, first and foremost, have to mend fences between the feuding coalition parties and also improve the government's flagging popularity with the public. This Cabinet faces a lot of challenges - ratifying the EU Constitution, tax reform, pension reform, health reform - and many analysts are very sceptical even now, predicting that it will be little more than a caretaker government."

Less than a week ago we saw a similar deal collapse like a house of cards within hours of being reached. What are the chances of history repeating itself?

"Well, in Czech politics the saying "never say never" seems to apply more than anywhere else and analysts are now very careful in making any kind of prediction. But those I've spoken to say they are fairly optimistic that this deal will survive, mainly because the warring coalition parties really seem to have exhausted their manoeuvring space and also because in the face of early elections they really do seem to want to make this deal. Having said that, it is difficult to speak for any of the three parties as such because the Social Democratic Party for one is deeply divided, so you never know where internal party conflicts may lead."