On Sunday afternoon another demonstration against the war in Iraq and the Czech Republic's attitude to it took place in Prague. Although recent polls suggest over seventy percent of Czechs are against the US-led military action in the region, the protests are usually attended only by a few hundred, mainly young people. Why is that so and what do the protesters think about the Czech Republic's official stance - those are questions Radio Prague asked the demonstrators on Sunday afternoon. 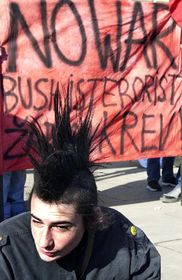 Prague, photo: CTK Anti-war activists throw an effigy of Foreign Minister Cyril Svoboda into the Vltava river. They were mocking the fact that the surname of one of the most pro-war Czech politicians in fact means "freedom". So they changed Mr Svoboda's name to "Cyril Iraqi Freedom" and drowned a dummy of the foreign minister, shouting that they did not want that kind of freedom. I walked among the crowd and asked people what exactly had brought them there.

And what do you think about the Czech involvement in the conflict?

"I'm actually pretty sad, because the Czech government - except the president, and I appreciate that at least we have this president now - is not able to take a strong position against the war in Iraq."

The activists protested against the fact that the Czech Republic is going to increase the number of its troops in the region and that the country has allowed American bombers to use its airspace. Zdenek Stefek of the Communist Youth Union. 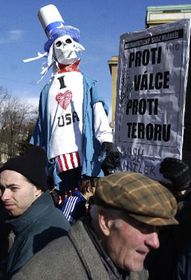 Prague, photo: CTK "I think it proves we are fully involved in the warring coalition, that we too, are aggressors."

According to recent polls almost three quarters of the population disagree with the US-led armed conflict in Iraq. However attendance at anti-war demonstrations is very low compared to other cities of Western Europe. Why is this so? I asked Zdenek Stefek of the Communist Youth Union.

"I think it is because our nation is not yet able to go out in the streets to express what it wants. But more of a paradox is that although three quarters of Czechs are against this war, the government is supporting it, albeit unofficially."

Looking for a non-Czech opinion on public indifference, I put the same question to a member of the English-speaking community here in Prague, Gwendolyn Albert of the International Peace Movement in the Czech Republic.