Two years ago a group of enthusiasts was drawn to a very special place in the centre of Prague, the long neglected area around the little church of St Catherine, just off Charles Square and in the area of the Charles University Hospital. To draw attention to the sorry state of the church they organized a tournament of the French version of bowls "petanque" and during that event they had an idea, which they are now hoping to realize. Zuzana Vesela reports. Area around the church of St Catherine The project is based on bringing the site back to life, with the help of artists, historians and people who live in the district of Prague 2. The area has a very special atmosphere, reinforced by its historical associations with none other than Albert Einstein and the famous Czech opera singer Ema Destinova. The idea is to create a sculpture park and to integrate the Baroque church of St Catherine with the area around. But it still lacks much needed support from the town hall which owns the whole area. One of the initiators of the project is Ivo Slavik.

"When we showed the project to some members of the local council, they shrugged their shoulders and said - 'It can't possibly be here, because it would spoil the lawn that's already on the site'. So we showed them some examples from abroad, and asked the councillors - 'Do you really think that these towns are less cultivated and civilized than we are?' They replied by saying - 'But you know, they do things differently abroad.' I don't want to tempt providence, but I think things are now beginning to change for the better."

Apart from its historical associations, one thing that makes the site special is the fact that it is an oasis of quiet within the city centre, not far from the 14th century Charles Square, the largest square in Europe. In the neighbourhood we can find an interesting mix of architectural styles ranging from the Baroque church of St.Catherine to the very modern building down the road, known as "Fred and Ginger", designed by Frank Gehry. The project hopes to respond to this diversity.

Ivo Slavik is also trying to involve children in the project, on the principle that their imagination and sense of place is more inspiring than the ideas of the so-called experts. At the same time, he is trying to raise the level of discussion about public art in Prague. 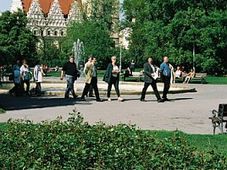 Prague 2 district council is waging war on what it calls an ‘extreme situation’ on the capital’s Karlovo náměstí. Mayor Jana Černochová has…

Prague 2 mayor resigns after accusations of abuse of power