"Four seconds of fame" for Czech knife in Bond movie

The Czech company Mikov, located in the northern town of Mikulasovice, has been around since 1794 producing cutlery of all kinds and purposes. As one of the directors of Mikov, Ladislav Bezdek, says, quite unexpectedly, one of its products appeared in the latest James Bond movie, Casino Royale, which Mr Bezdek jokingly calls "Mikov's four seconds of fame".

"One of the exclusive models of our flick knives appears in the film, in a scene where James Bond is attacked from behind by a villain holding a knife. While they are fighting over the knife there is a close shot of the blade where our brand is clearly visible."

Rather than a case of well-calculated product placement, Ladislav Bezdek says we are talking about a fortunate set of circumstances.

"We don't know exactly how it happened. Our dealer in the United States told us it was him who sold this knife to the filmmakers. But it could also have happened because parts of the film were shot in the town of Karlovy Vary. And across the street from the hotel where some of the locations were shot there is a knife shop selling our products."

But away from villains and superheroes, probably everyone who has lived in this country in the last 50 years has once owned or at least seen the so-called "rybicka" or "little fish", a pocket folding knife whose handle is shaped like a fish, complete with scales, fins and tail.

"The 'rybicka' knife is a phenomenon, it is an evergreen among our knives. Probably every Czech, and Slovak for that matter, has owned one or more as a child. This knife is something that belongs to the Czech Republic, just like Czech beer. Recently, we launched a luxury version made of gilded Damascus steel. 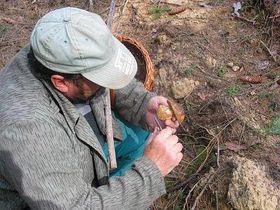 It sells well abroad, also because it is so unique for a knife to be shaped like an animal. The exclusive model has become a sought-after present. This knife is so loaded with memories for every Czech. The material gives it another dimension and that's also why it is in such great demand."

For its simplicity and small size, "rybicka" has traditionally been one of the favourite knives Czechs of all ages bring with them to the forest on their Sunday mushroom hunts. While before 1989 the knife cost only a few crowns and usually didn't last long, better-quality steel is used these days and the price of the basic model has increased to some 60 crowns (3 USD). "Rybicka" has been produced at Mikov since after WWII but the name of its original designer is not known. Who knows, he or she might have been a millionaire today. Czechia is not famous for making world-class cheese. There is, however, one notable exception: a very peculiar local type of cheese… 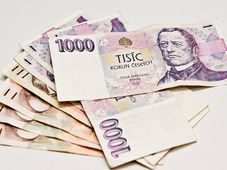