For the 7th field hospital it's 'Destination Kuwait'

Destination Kuwait: that is likely to be the arrival point for the Czech's 7th field hospital over the next few days, in accordance with last week's UN request for aid. If approved by parliament this week, a total of three hundred personnel, including doctors, nurses, and logistics staff, will join the anti-chemical unit already stationed in Kuwait. They will be ready to cross into Iraq to help lessen the humanitarian crisis in the southern part of the country. Defence Minister Jaroslav Tvrdik, photo: CTK There is little doubt that those who can help will, in the case of the Czech Republic's 7th field hospital, on the verge of being sent to the Gulf. On Tuesday the government unanimously approved a plan to send its personnel to Kuwait to provide aid in response to the growing humanitarian crisis in the region, as the war against Iraq enters its third week. Stressed by the government: that the plan will meet last Friday's UN request, asking foreign nations for help. Defence Minister Jaroslav Tvrdik:

"Similarily like the antichemical unit, field hospital personnel will have a mandate to enter Iraq to deal with any after-effects from weapons of mass destruction. The unit will be under international command and will be considered humantitarian aid there for the benefit of the local population. At this point in time the alliance has not asked for our help for its soldiers, and the project will not be there as part of the [military] operation underway, but only to deal with possible consequences and managment, to deal with the possible impact on civilians."

And how much will the field hospital cost the state? It has been estimated a six month operation would come to over 470 million Czech crowns. However, the defence minister has indicated the cost wouldn't be covered by the Czech state alone: 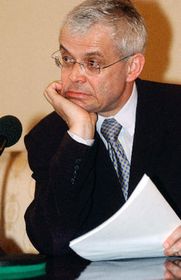 Prime Minister Vladimir Spidla "We are in negotiation with our allies, that means Great Britain and the US, as well as international organisations, so that they would help us finance this mission, either through direct funds or through offering transport capability, which is the single most expensive component. I am confidant we will find the necessary support, several countries, unable to help on the spot, already offered finances - we have the capacity of helping at the scene, but not enough capital."

Before the project can get off the ground it still needs to be approved by parliament, though all indications are the field hospital will get the green light in the coming days. As for which steps will be first taken by hospital personnel once they arrive in Kuwait, those will be assessed at the scene. Prime Minister Vladimir Spidla:

"First we will prepare the unit for Kuwait, then we shall decide based on the concrete situation where we will send the unit so that its help can be most effective, and the risk reasonable."