This past Saturday saw the opening of an all important inter-governmental conference in Rome, bringing together leaders from all fifteen current EU countries and ten countries and slated to join in May next year. On the table: a final phase of negotiations aimed at streamlining the EU's draft constitution, a two-hundred plus page document that will outline, once and for all, a new legal and moral framework for the European Union. Already there have been indications this will not be an easy task. Jan Velinger was in Rome at the weekend and he joins us now to tell us how things went. EU summit in Rome, photo: CTK "Thank you Dita. If nothing else the 6th IGC - inter-governmental conference kicked-off with wide expectations Saturday - Italian Prime Minister Silvio Berlusconi, greeted European leaders on the steps of Rome's monumental conference centre, and said in his opening speech the new constitution would mark the beginning of a Europe united on all common issues, secure in its identity. Beneath the words and handshakes though, it has to be said that potentially contentious positions had already been drawn by individual states or groups of states in the weeks preceding the opening of the IGC and these differences remain. Larger points ranging from overall representation within the EU in European Parliament - a major issue for Spain - to sensitive issues like a proposed mention of Europe's Judeo-Christian roots in the preamble of the draft text - something Italy and Poland would like to see. In short: the weeks and months ahead will see many difficult negotiations - even though, as leaders stressed, there would be no complete reopening of issues - already agreed upon in the draft. That process, all are reminded, took 18 months and the result can not be shrugged aside by any one country that decides it now wants things different. The process has simply gone too far down the road for that."

What about the Czech position? Were you able to get a feeling for which points the Czech delegation was confident it would be able to push through?

"There is confidence among the Czechs that, along with others, they will be able to push for a proposal enforcing the rule of one commissioner, one country, for each EU member at the European Commission. This is a particular sticking point for the Czechs who feel a lack of a commissioner would leave them improperly represented. Another demand is that a new definition on qualified majority voting be passed - requiring a greater qualified majority, ensuring again, that smaller countries would not be swamped by voting on proposals from some of the larger states. These are just a couple points the Czechs feel will be necessary to negotiate if they are to ratify the new constitution - especially one commissioner, one country. I asked Czech Ambassador to the EU Pavel Telicka whether he thought it was a feasible demand.

"I think it is feasible because those who oppose it should to some extent understand that for a number of the countries it is one of the crucial points, one of the crucial points that could mean a problem even in the ratification, and then it would become a problem for everyone else. We know that some have already signalled that those who oppose so far this probability could allow it to fly under certain circumstances. I think that it is feasible: I should have an understanding also for British points, German points, Spanish points, and I expect also some understanding for ours. I agree that the agenda should not be too wide, but I think that are some issues that still remain to be settled." 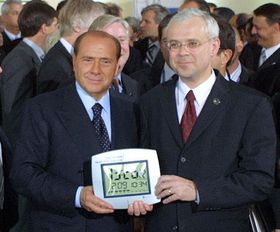 Czech Prime minister Spidla (right) and Italian Prime minister Berlusconi, photo: CTK Ambassador to the EU Pavel Telicka there and in connection with the question of ratification I also asked the ambassador whether there was concern with the possibility of six or seven countries holding referenda on the final draft. He indicated this was indeed a factor on negotiators' minds, seemingly yet another reason why all EU states - current and acceding should come away from the negotiating table feeling no one has gotten a raw deal.

"I think that we should have that on our mind when we negotiate in the ICG. If a country comes and says this is really a crucial point to me, a constitutional problem or whatever, then I should take into account what that person, or what that country says. On the other hand I should not misuse it. I should not be coming and saying 'This is a really crucial point, and this is a constitutional problem, and this will break my neck. We should take that into account, and there is some concern and attention paid to it."

To sum up then, Jan, all eyes will be on Rome in the coming weeks...

"They certainly will. Aside from the question of how long negotiations will take - the Italians, for example, would like to see them wrapped up by December though there is some question over how realistic that is - most involved, including Czech Prime Minister Vladimir Spidla and Foreign Minister Cyril Svoboda repeat quality of the final draft - not time - is of the essence. At worst, if things do not wrap up by December the next hope is the text be signed and ratified by May 1st - when the ten new countries join, preceding EU elections to parliament in June. Barring an unprecedented meltdown in negotiations or the disaster of negative referenda, the EU will have a new constitution next year, something all leaders, including the Czech prime minister, see as a truly historic event."