Deputy foreign minister: small EU countries not "ganging up" on big ones

Prime Ministers of the Visegrad Four - Poland, Hungary, the Czech Republic and Slovakia - met at Dobris Chateau outside Prague on Wednesday, ahead of the inter-governmental conference (or IGC) on the future of Europe. The Visegrad Four are part of a much larger group of countries unhappy with the terms of the draft EU constitution to be discussed at the IGC, which gets underway in Rome on Saturday. The Visegrad Four agreed on a number of key demands they want to table in Rome, chief among them being the "one country, one commissioner" principle. Rob Cameron spoke to Jan Kohout, deputy Foreign Minister for European Affairs. 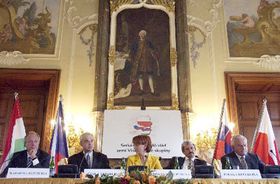 You have your list of demands, or rather list of priorities for the IGC in Rome. What happens if the big countries - Germany, France, Italy - just steamroll over your objections to the EU constitution?

"It's too early to say what would happen. We're just a few days before the start of the IGC, so it wouldn't be proper to say now what the reaction would be. I expect that the spirit of the Convention [on the Future of Europe] which was very consensual will also prevail at the IGC. It's clear that all the countries wish to have a successful IGC."