It's 65 years today since the leaders of Britain, France, Germany and Italy gathered in Munich to sign a document which would have lasting consequences not only for Czechoslovakia but also the whole of Europe. Under the Munich Agreement, Czechoslovakia's German-speaking border regions were sliced off and handed to Nazi Germany, in what has been described as one of the greatest betrayals of the 20th century. Rob Cameron looks back at Munich 1938. 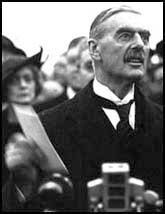 Neville Chamberlain "How horrible, fantastic, incredible it is, that we should be digging trenches and trying on gas masks here because of a quarrel in a faraway country between people of whom we know nothing."

The now infamous words of the British Prime Minister Neville Chamberlain, words which encapsulated Britain's policy of "appeasement" towards Nazi Germany. That radio address to the British people was made on September 27th, 1938, shortly before Chamberlain flew to Munich for a final round of talks with Hitler to avoid the prospect of war.

"However much we may sympathise with a small nation confronted by a big and powerful neighbour, we cannot, in all circumstances, undertake to involve the whole British Empire in war simply on her account."

Britain had no mutual defence treaty with Czechoslovakia. But Britain was treaty-bound to defend France, which in turn was obliged to defend Czechoslovakia. The British government was worried that if France was drawn into an armed conflict with Germany, Britain would be sucked into a new European war. Chamberlain's solution was to give Hitler what he wanted, in return for a promise of "Peace in Our Time."

"This morning I had another talk with the German Chancellor Herr Hitler. And here is the paper which bears his name upon it as well as mine." Adolf Hitler The Munich Agreement was signed on September 30th, by Chamberlain, Hitler, Mussolini and the French prime minister Daladier. The Czechoslovak leader, Eduard Benes, was not invited to the talks. Czechoslovakia was ordered to give up one third of her territory, population and economic resources. The country's newly-built system of fortifications - designed to defend Czechoslovakia from a German attack - were handed over without a fight.

Those who defend Chamberlain say he was left with little alternative: the country's armed forces were no match for those of Nazi Germany, they say, and there was little appetite in Britain for war. But most of those old enough to remember September 1938 - when Central Europe's only democracy was dismembered, and the Great Powers were outwitted and humiliated by Hitler - do so with a sense of revulsion and shame. 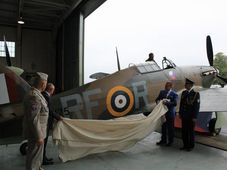 In a major honour for Czech RAF legend Josef František, the Hawker Hurricane plane in which he met his death near the end of the Battle… 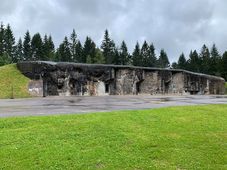 Soon after Hitler came to power in 1933, Czechoslovakia began planning in earnest to build a massive fortifications along the border,…