Czech Republic reactions to the air strikes against terrorists

The Czech Republic, like the rest of the democratic world is reacting to the air strikes against the terrorists on Afghan soil with understanding and with a feeling that the steps taken are in the interest of this country, too. President Vaclav Havel was among the first to react to the news.

"This is not attack on Islam, this is no attack against any nation, nor any religion. This is defense of the values of civilization uniting many religions, many cultures, many countries, uniting the whole world."

True, said the president, this situation will have its consequences for all of us, but:

"If we want to enjoy the right to live a dignified life, we must be prepared that sometimes these values and these rights have to be defended, sometimes even in armed combat. I think this calls for calm patience and that there is no reason to panic. At the same time I think that all of us must realize that there are times when our freedoms require even some sacrifice, or at least some limitations."

And how does the chairman of the biggest opposition party, the Civic Democrats, and chairman of the Lower House of Parliament, Vaclav Klaus see the latest events. Radio Prague asked him whether he saw the situation after September 11th as a clash of civilizations.

And how does Vaclav Klaus see the position of the Czech Republic in this situation?

"I am very happy that until now the unity inside the Czech Republic, especially among the political elite, among the leading politicians, is extremely high. I think, comparing it with some neighbor countries this is quite visible. Most of the neighbor countries here in Central Europe, both East and West, there are many debates - yes, but. In this country, until now, the unity is very high and I am very glad that this is the situation. So, in this respect I am absolutely sure that the Czech Republic has played a very good role in all these events."

For once there seems to be very little opposition to the steps taken by the government. Member of Parliament for the opposition Freedom Union Party, Ivan Pilip agrees.

"Generally, we do support the attitude of the government, because we are sure that the Czech Republic should support the United States in the reaction to the terrorist attacks of September 11th, and we are satisfied that the government offered the full support of the country to the United States and we also agree with the acceptation of Article 5 of the NATO Agreement. We would also be glad if this conflict were not a part of some internal political discussions in the pre-election time and we must say that up till now, with some small exceptions, it is really not an internal political topic and that all democratic parties are unanimous in the support for the United States."

And what about the man in the street? Does he understand the situation and does Mr.Pilip think enough has been done to explain the events?

"Well, people definitely do realize that the situation has changed and that there are some threats for the country, and, on the other hand, my feeling is that the majority of people are aware that the attack against the United States was something that did effect the situation in the Czech Republic and that it was also an attack on some values that we share with the United States. So, definitely, the atmosphere has changed. We can see it, for example, in some support for the steps of the government or the political representation, as well as for the support for some new programs of the army, because when we discussed the tender for the fighters, according to the opinion polls a few days ago, there is a huge increase in the support for buying super-sonic fighters for the country, which means that the people do observe the situation quite a lot and that they realize that something new has come and that it has changed the situation even in our country."

A point we, too, found when we addressed some people in the Prague streets.

"The best offence is a very strong defence. And you must be prepared to defend yourself. The United States learned this lesson the hard way and I hope this never happens to the Czech Republic."

"The army should be modernised because we should be at the same level as the other Nato members. I think they should buy new planes in the future. If Nato needs to go to war then the Czech army should be in the war as well. "

Do Czechs feel in danger? Are they afraid of the future?

"I think everybody will be affected by this world war. And so that is our problem as well. I think that every tourist will be more nervous. There will be less tourism and the price of things will be higher. And of course, we could be attacked as well, and that is bad."

"As a black guy sometimes people ask "are you American?" and somehow that scares me because of where I'm living. Something may happen but I don't see how it's going to affect me."

"No, I'm not scared, I don't have any fears about this situation. I know Arab people because I worked in the middle east and there isn't any reason to be scared."

So, do Czechs think their lives will be changed due to the latest events in the world?

"I think that it's not good to begin a war with Afghanistan but what can we do?"

"Actually I think the American's are doing the best thing. They are not doing it because New York or the two plaza's that were bombed but they are doing it in case of next time- for the future. Because if they don't do anything these people might do something else. I really support them and I am really happy with President Bush and if I were in his shoes I would do the same."

"I think the situation in Afghanistan is terrible and they should pay for their attack on American cities. I think that the procedure of the Americans and Nato allies is correct and I think all the terrorists in Afghanistan and all over the world should be punished for these attacks."

"I am whole heartedly with the Americans and their attack on Afghanistan - on the terrorists in Afghanistan rather than the country itself." 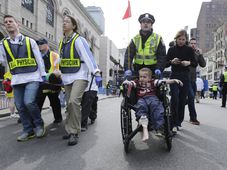 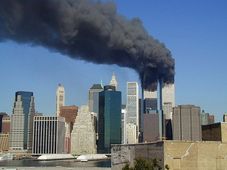