In this week's edition of our special history of Czech Radio to mark the station's 80th anniversary, Rob Cameron looks at the station's unique role in the Second World War. Broadcasts from that time bear witness to Czechoslovakia's painful wartime experience: from early Radio Prague reports countering hostile Nazi propaganda, to the Nazi-run "Bohmen und Mahren" station announcing the names of Czechs executed in reprisal for the killing of Reinhard Heydrich, to the famous "Revolutionary Radio" of May 1945 calling on Czechs to rise up against their Nazi occupiers - the start of the Prague Uprising.

Despite the staggering advances in mobile communications over the last 50 years, the radio is still one of the most effective means of relaying information. And that's especially true in wartime - when truth, as we all know, is the first casualty.

Czechoslovak Radio played a crucial role in the months leading up to the Second World War. With a large ethnic German population living in the border regions of Czechoslovakia, the Nazis were keen to stir up mistrust and hatred between the two communities. Goebbels soon realised the propaganda potential of radio, and the Nazis regularly broadcast fictitious stories of Czech atrocities against the German minority - broadcasts which were relayed both to the border regions themselves and also to the wider world. One of the main tasks of Czechoslovak Radio's own international service - Radio Prague - was to deny those claims:

"Once again tonight we must perform the distasteful task of refuting further invented reports broadcast by the German wireless stations. It is not true that the rectors and deans of the German universities in Prague were forced at the point of a gun to sign a declaration of loyalty to the state. This absurd allegation was denied by the rectors and deans themselves in a statement made today, denying that any pressure whatever was used against them."

Unfortunately those denials did little to prevent the Munich crisis of September 1938 and the dismemberment of Czechoslovakia that followed. Six months later, on March 15th 1939, German troops occupied what remained of the country, and established a Nazi Protectorate. For the next six years, Czechs were to live in fear of radio announcements like this one:

"This is the station Bohemia from the radio group Bohemia and Moravia. The military court in Prague has condemned the following people to death by shooting, in a sentence passed on the 2nd June 1942: Beneda, Karel, born of the 14.7.1911, place of residence, Prague 11; Svoboda, Vladimir, dr., lawyer, born on the 30.5.1900, place of residence Budweis [Ceske Budejovice]..."

A Nazi official announcing the latest round of executions in retaliation for the assassination in 1942 of the hated Reichsprotektor Reinhard Heydrich, one of the architects of the Final Solution. It was also from the Nazi-controlled radio that Czechs came to hear of the destruction of Lidice, the village near Prague that was razed to the ground in a terrible act of revenge for Heydrich's killing:

But the radio also played a major part in the liberation of Czechoslovakia from Nazi oppression. Czech resistance fighters had infiltrated the Czechoslovak Radio building as early as 1944, secretly moving equipment out of the building to safe locations to prepare for the uprising to come.

At 12.33 pm on May 5th, 1945 - with the U.S. Army halted in West Bohemia and the Red Army still far to the east of Prague - Czechoslovak Radio issued the following call to the Czech people to rise up against their Nazi occupiers:

"Calling all Czechs. Come to our help at once. Come and defend Czech Radio. The SS are murdering Czech people here. Come and help us. You can still get in through the Balbinova Street entrance..."

There followed a bitter battle for control of the radio building, and for the city of Prague. As the battle raged on, radio staff - holed up deep inside the besieged building - issued desperate appeals for outside help from Soviet, British and U.S. troops just hours from the city: 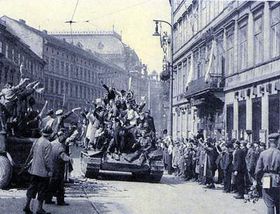 "Govorit Praga! Praga govorit! Prague calling the Red Army. We need your help!" "Here is Prague! Here is Prague! Americans and English - help us! We need guns. There are too many Germans!"

But the help didn't arrive until May 9th, when the Red Army - as secretly agreed between Stalin, Churchill and Roosevelt - rolled in to liberate Prague. By that time though, the city had liberated itself - an effort which cost 3,000 lives. Seventy-nine people died in the battle for the radio building itself. The names of those who laid down their lives are commemorated on a plaque at the entrance to Czech Radio, a plaque which also bears those famous words - "Calling all Czechs". 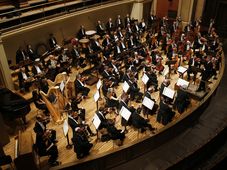 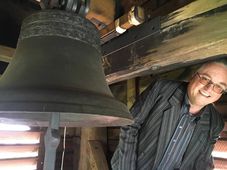 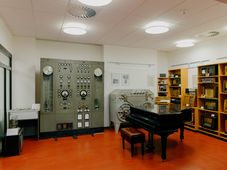