The three parties in the collapsed Czech government on Thursday agreed on the formation of a new majority-backed Cabinet, ending months of political turmoil and paving the way for the embattled Prime Minister Stanislav Gross to step down. Following eight hours of gruelling talks, Mr. Gross emerged to face the media at 3 am on Thursday morning, saying that the three parties had agreed on the fundamental points of a majority, pro-European government which should see the country through to the next general elections in mid 2006. Pavel Nemec, Miroslav Kalousek and Stanislav Gross, photo: CTK Daniela Lazarova has been following the story. So Daniela, it would seem that the political stalemate has finally been broken, what do we know about the new Cabinet?

What we know at this point is that it will be made up of the same three coalition parties and will thus have a tiny majority in Parliament; it will have 17 ministers with the Social Democrats holding eleven ministerial posts and the two smaller parties -the Christian Democrats and the Freedom Union- getting three ministerial posts each. The names of individual candidates for these posts are being kept under wraps until they have been officially approved by the President, but according to unofficial sources there will be a re-shuffle in five ministerial posts, including the post of prime minister. Of course, the key change is the departure of Prime Minister Gross, the main demand of the Christian Democrats, who argued that a scandal over his family finances had made him a liability. And the man who is expected to head the old-new cabinet is Jan Kohout, currently the Czech Republic's ambassador to the EU.

Are all three parties in the governing coalition satisfied with the new arrangement?

It would seem that they are. First and foremost I suspect that all three parties are glad to have been able to avoid early elections, since they are all doing rather poorly now in terms of public support. The strongest party of Social Democrats has salvaged what it could out of a bad situation. The head of the Freedom Union Pavel Nemec has described the agreement reached as "the best possible solution to the crisis". And the Christian Democrats, who have been very much at loggerheads with the Social Democrats in recent weeks, also got what they wanted out of the talks: a new PM, three seats in the new cabinet and a guarantee that none of the coalition parties would cooperate with the Communists during the Cabinet's term in office. 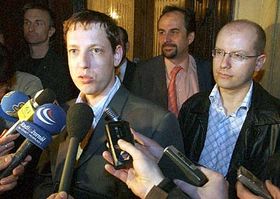 Stanislav Gross, Jan Kohout and Bohuslav Sobotka, photo: CTK It seems that the parties involved do not lack confidence regarding their ability to govern for the next 12 months or so. How do analysts feel about it?

Well, although analysts are careful about making predictions before we actually know who will be in the old-new government, it is clear that the expectations are not very high. The government is expected to focus primarily on ratifying the EU Constitution, but there are some serious doubts as to whether it can tackle the much needed health and pension reforms. Having said that, the presence of finance minister Bohuslav Sobotka in the old-new Cabinet should have a heartening effect. He has been the central figure in the country's fiscal reforms and is expected to remain in the post of finance minister. 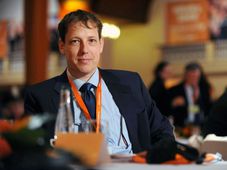 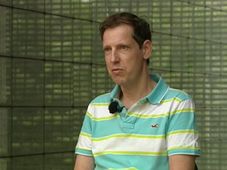 Once Europe’s youngest leader, Stanislav Gross quit politics over a financial scandal before becoming mega rich through a shares deal.… 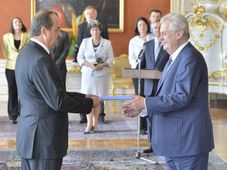