Many Czechs catch their television news in the early evening, between 7 and 8 o'clock. But which particular news programmes they choose to watch has changed somewhat since the New Year, when Czech Television brought its main evening news forward by 15 minutes. The change also affects hundreds of thousands of Czech children, as a popular animated programme also starts earlier.

On January 1 Udalosti, the main evening news on public broadcaster Czech Television 1, began broadcasting at 7:00 instead of 7:15. Since then TV Prima - which also starts its news at 7 - has lost around half a million viewers; before Christmas it used to get roughly a million and a half, like Czech TV.

But the real winner is TV Nova, the country's most popular channel. Czech TV goes to regional news at 7:25 - five minutes later viewers in their droves switch to Nova. Its main news has gained around 500,000 viewers and is now regularly watched by over 3 million Czechs.

Czech TV spokesman Martin Krafl is not too disturbed by the exodus to their main rival:

"We are not worried that they're won't be enough viewers. What does it mean, enough viewers? Czech TV provides a service which is not successful only if we have a lot of viewers. We are interested in quality, in professional work.

"And we believe that viewers would like to know about their region, will change their minds and will watch the regional news on Czech TV."

Vecernicek is a daily animated children's programme which has become a national institution since its first broadcast, way back in 1965. Czech TV are now showing it a quarter of an hour earlier, to allow for the earlier news programme. But the station's spokesman says there have been extremely few complaints.

"Some journalists in the Czech Republic said that to change the time from 7 pm is something that is against tradition. But they are wrong, there is no tradition, at all.

I know in many households children go to bed after Vecernicek. Do you think some parents will be grateful for having a 15-minute longer evening?

"(laughs) I've heard about that, yes. Maybe. Maybe some fathers will be happy." 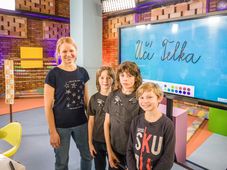