The city of České Budějovice in South Bohemia is bracing for more violent anti-Roma protests this weekend, and police fear they could attract neo-Nazi skinheads from both the Czech Republic and abroad. Last Saturday an anti-Romany demonstration was followed by an unannounced march to the local Máj housing estate, home to about 350 Romanies. Around a dozen people were injured as marchers clashed with riot police.

Ultra-right demonstrators in České Budějovice, June 29, 2013, photo: CTK There were ugly scenes at the Máj housing estate in České Budějovice on Saturday, as demonstrators – many of them neo-Nazis – tried to break through a cordon of riot police. The marchers had peeled off from an earlier permitted demonstration, called after an incident in a children’s playground escalated into a violent conflict between Roma and white parents.

Police have been criticised for their handling of both the demonstration and the march that followed – local people can be heard on video footage shouting ‘black bastards’ before the unannounced march set off towards the housing estate, but a local police spokesman claimed the epithet was aimed at them, not at Roma citizens. The march itself saw neo-Nazis giving the Hitler salute and shouting racist slogans, cheered on – and then joined by - local residents. 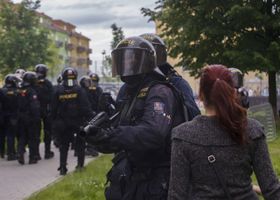 Riot police out in force in České Budějovice, June 29, 2013, photo: CTK In total some 10 people were injured in clashes with riot police and forty people were arrested; no charges have yet been made. Police say they are still evaluating video footage of the events.

There have been no further incidents since Saturday but police are on high alert – a number of Facebook pages have sprung up advertising an event variously described as “A Demonstration Against Black Racism”, “A Demonstration Against Non-Adaptable Citizens” and simply “A Walk Through České Budějovice”. Police fear a second demonstration could attract hundreds of far-right extremists from the Czech Republic and even neighbouring countries. The mayor of the city has called on people not to join forces with the skinheads; certainly, the city is bracing for trouble. 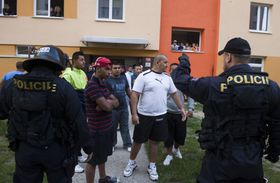 Máj housing estate in České Budějovice, June 29, 2013, photo: CTK There have been similar far-right demonstrations before in the Czech Republic, but commentators have warned of a new, dangerous trend; so-called ‘decent’ Czech citizens cheering on and even marching alongside neo-Nazis in towns with socially excluded Roma communities, living in dilapidated housing estates in rundown parts of town, usually after being moved in as part of some nefarious housing scam involving corrupt property speculators and quickly becoming hotbeds of crime and disorder. NGOs say the problem is that these communities are beginning to resemble ghettos, and the marches against them pogroms.

European far-right leaders, including Marine Le Pen of France and Geert Wilders of the Netherlands, gathered in Prague on Thursday…

To promote neo-Nazi ideology is a crime in the Czech Republic. Giving the Seig Heil salute and denying the Holocaust is also forbidden,…

Expert on extremism: Intolerance is seeping into mainstream parties across the political spectrum

The Interior Ministry this week issued its annual report on extremism, in which it says that ultra-right groupings are no longer politically…