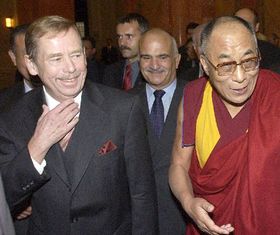 Vaclav Havel (left) and Dalai Lama, photo: CTK A meeting of representatives of World Religions took place on Sunday at Prague's Obecni Dum, or Municipal House. Former Czech President Vaclav Havel brought together prominent Buddhist, Islamic, Jewish and Christian leaders including his Holiness the 14th Dalai Lama. It was a follow-up to a five-year series of Forum 2000 conferences that Mr Havel has arranged in Prague since 1997. He opened the forum to discussion by reminding the public of the importance of humility before the order of nature; our political social landscape has entered a chase of consumption and we need to think of the long term: those things that transcend us. The panelists then gave insight into religion's place in a world of rapid globalization.

Mustafa Ceric, one of the leading European Islamic thinkers, began tackling the tenuous question of whether religion and politics should remain strictly separate. As liberalism and secularism have attempted to do so in western countries over the last centuries, there was a synergetic sharing of values from each of the panelists regarding the question. In looking at our history, religion can often be thought of as a label and used to vilify others. Rabbi Julia Neuberger says she doesn't see how religion and politics can be pulled apart.

"I have to speak not only as a very liberal Jew, but as a British citizen. And of course in our country we have an established church, a church where the Bishops sit in on parliament. Therefore we have system where the church is integrated, to some extent, with the political life of the state. So, I would argue that whilst other Western democracies have tried to keep religion and politics apart, in Britain we don't do so and in many other western democracies they have failed to do so whether they wished to do it and have failed to understand the very strong religious desire that effects many people. So my first feeling is that no; we can't see them as separate but in different constitutions they play a different role."

Rabbi Neuberger concluded her speech in saying that dealing with religion at a local level in government is easier, national is hard, and international is critical.

The most humble of all the speakers, the Dalai Lama, complimented dialogue with humour, his innate charisma and a grassroots speech. He began by saying all religions allow for the transformation of the mind but all have a different approach. All religions have: compassion, forgiveness, tolerance, charity, self discipline. And conceded that while we have to value their similarities we must also value their differences. We must keep all of the religions separate because among humanity there are so many dispositions, therefore, one religion, one philosophy simply cannot satisfy all of the needs.

Professor Tomas Halik is a priest and Professor of Theology at Charles University. With multiculturalism on the rise in the Czech Republic, I asked him if he thought Czechs were becoming more interested in different religions and also whether the issues brought up at the forum would enrich visitors?

"After this militant atheist regime, Czechs do not have as many ideas or information about religious life. And the religious sentiment is not so strong or it is not so connected with the traditional church and the traditional institutions. So, we have a very special climate in our society and there are also some prejudices in religion as such. So I think it is very important to host an event like this for a Czech audience, especially with this multicultural assembly, and I hope it will be a source of inspiration for them."

The nature of the Forum 2000 conference is somewhat of a symbolic event with no immediate outcomes. But the organisers hope the opportunity to listen to dialogue between such inspirational speakers promoting universal tolerance will stay with the audience long after Forum 2000 has ended.