Book on Czechoslovak spy to be adopted by Hollywood

One of the most fascinating Cold War spy tales, involving a Czechoslovak operative who fooled a woman into thinking he was her long abandoned son, is being adopted as a screenplay by a Hollywood studio. Jaroslav Kmenta, who is the author of a book on the spy and later sold the rights to Fox Searchlight Pictures, says the studio has used its option to go ahead. Erwin van Haarlem biography by Jaroslav Kmenta, photo: JKM - Jaroslav Kmenta In 1975 the Czechoslovak State Security service sent a spy to London with a very special cover story. He was to assume the identity of a Dutch-Jewish child whose mother had abandoned him as an infant in 1944.

Two years later the man successfully fooled the mother, into believing he was her long lost son. For the next 15 years he was known as Ervin van Haarlem.

Posing as an art dealer, he successfully gathered information from British, American and Israeli politicians, in part due to the fact that he was welcomed into Jewish circles thanks to his adopted identity. This allowed him to pinpoint real and potential Mossad agents and send the information back to Czechoslovakia.

However, in 1988, just before the curtain fell, MI5 operatives arrested him at his apartment and he was sentenced to 10 years in jail. Since he refused to reveal his identity, newspapers referred to him as “the man with no name”.

It was only in 1992 that the head of the new Czechoslovak secret service revealed his name was Václav Jelínek and asked the British to release him.

After being deported to Prague in 1993, Jelínek disappeared, refusing to talk to authors who were eager to make his story into a book. This changed only in 2001, when the former spy himself decided to contact the Czech writer and journalist Jaroslav Kmenta, after reading his stories on similar topics.

Mr. Kmenta says the next four years of writing his biography were some of the hardest in his life.

“Hundreds of hours’ worth of meetings followed the initial encounter. He told me his whole story and I then had to go through a complex process of checking and counterchecking, trying to find out what is the truth what is his subjective reality, etc. I wanted it to be perfect because I knew that this Hollywoodesque plot had potential.” 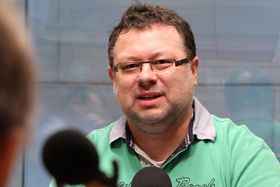 Jaroslav Kmenta, photo: Luboš Vedral / Czech Radio “The rights to my book were purchased by Fox Searchlight and the famous screenwriter and producer David Klawans asked me for collaboration in 2014. The contract was signed last year and this year they used their option, which suggests that they are very interested in the topic, because normally they would not use it so quickly.”

Mr. Kmenta says he is not allowed to provide more details, but is hopeful that the project will go ahead. Laughing at the question about who he would like to see in the main role, he says that Christoph Waltz would be his favoured pick, with Diane Kruger acting in one of the female roles. However, he does insist that if Ben Affleck, who has worked with Klawans previously on the Oscar-winning Argo, took the job, he would be happy as well.

The fall of the Iron Curtain is often described as a sudden, unexpected event. The following years during the 1990s saw both a major…