After three days and four nights, fire fighters say they have managed to put out a forest fire in the Ceske Svycarsko (or Bohemian Switzerland) national park in the north of the country. The biggest such disaster there for three decades, the blaze has destroyed some 20 hectares of forestland. Some twenty fire units remain at the site as it is still smouldering and a thick layer of glowing ash threatens to set other trees on fire. Photo: CTK As the current hot and dry weather is expected to continue, fire fighters will guard the site for another two weeks and also watch for other potential blazes elsewhere in the park. Petr Kopacek is the spokesman for the Czech Republic's fire service.

"The forest fire in Ceske Svycarsko which started on Saturday afternoon has been one of the biggest in recent years. 30 fire units, that is some 160 men, tackled the fire throughout Sunday and Monday. The blaze affected an area of some 20 hectares. The operation was complicated by underground fire and inaccessible terrain which prevents us from using our mobile technology. Two police helicopters and a fire fighter plane took part, dropping water on the flames." 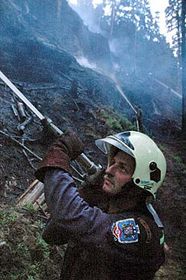 Petr Kopacek says the cause of the blaze has not been determined but he says the likely reason is negligence while handling a fire or someone dropping a cigarette butt in the forest scorched by the current heat wave. The continuing weather conditions have prompted regional authorities to issue certain restrictions.

"Several regions have restricted the use of naked flame in open countryside, such as making campfires and so on. Smoking, of course, is banned in the Czech Republic's forests all year round. Because of the weather, fire hazard is increased everywhere and the incidence of fires is twice as high as the long term average. Our units go out to more than 100 blazes every day, most of them out in the open, in the fields, in haylofts, forests and meadows."

The Ceske Svycarsko National Park has yet to assess the damage caused by the blaze but it is expected that some 5 million crowns (210,000 USD) will be needed to renew the vegetation. It will take a couple of months before it is clear which trees have survived the blaze. The management of the park says it is also possible that the forest, weakened by the disaster, will fall prey to bark beetle which will destroy what is left.

Thursday evening will see the traditional witch-burning celebration in many parts of the Czech Republic. While the night of April 30…