A major event for lovers of Czechoslovak cinema at this year’s Karlovy Vary film festival has been the world premiere of a digitally restored version of The Shop on Main Street. A portrait of the Aryanisation process in the wartime Slovak state, the 1965 masterpiece earned Ján Kadár and Elmar Klos the country’s first Oscar. On the delegation for the film was Mehelli Modi of Second Run DVD, who previously brought it out on Blu-ray. I asked him what made The Shop on Main Street a great movie. 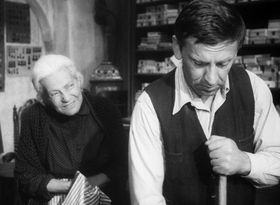 The Shop on Main Street, photo: Film Servis Festival Karlovy Vary “There are two things. One is a very personal reaction to the film. And one is the fact that the actors, the writing, the direction, [Zdeněk] Liška’s music – they all work in harmony to form this film which completely…

“It starts off as a character comedy and it continues going along that way, with all these little bits thrown in, and then suddenly, half-way through, without warning, it just whacks you and the whole thing completely changes.

“From a personal point of view, I just feel that it shows so clearly how good people who don’t say anything gradually get involved and get embroiled in tyranny, or in the horrors of tyranny.

“And I think that, unfortunately, it’s something that we need to be aware of, because it’s kind of raising its head again.”

For you, where does it stand in relation to the Czechoslovak New Wave? 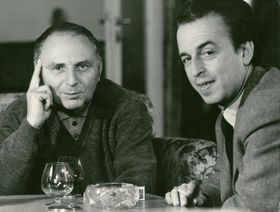 Ján Kadár and Elmar Klos, photo: Film Servis Festival Karlovy Vary “I guess in a sense it’s not completely in that period known as the Czech New Wave. But Kadár, and Klos especially as far as I know, encouraged a lot of filmmakers.

“Klos wasn’t the director so much as the producer and facilitator of the film.

“For me, I think the strength of the film is that it allowed people to speak their mind through the Czech New Wave as well.

“So for me it doesn’t fall into that period, but I think everybody in the Czech New Wave appreciated this.”

You’ve just seen the new digitally restored version of The Shop on Main Street, or [the UK title] The Shop on the High Street. What were your impressions? 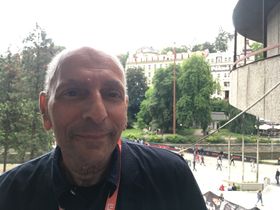 Mehelli Modi, photo: Ian Willoughby “The first time I saw the film was probably 40 years ago. So to watch it in a condition where it felt like I was watching it for the first time, I thought the restoration has been beautifully handled.

“It’s so easy when you’re restoring a film to flatten everything out because you want it to look new.

“What they’ve done here is they’ve been really respectful of the time the film was made, the kind of film stock that would probably have been used – it’s a film from the 1960s and they haven’t tried to make it look like it’s from the 21st century.

“It looks like a film from the 1960s but with the detail captured in almost such a way that in speaking to some of the cinematographers who worked on this restoration, they felt that it might be even better in a sense than when it first came out.”