Now in its thirteenth year, the annual Prague Writers' Festival began on Sunday evening with a gala, once again drawing well-known writers from all over the world to the Czech capital. As usual, it was put together by author and editor Michael March. 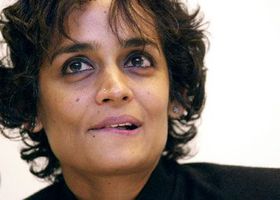 Arundhati Roy, photo: CTK Sunday's Gala evening featured a reading by Arundhati Roy from India as well as a performance by Japanese artists Gozo and Marilya Yoshimasu. Roy, who is involved in a resistance movement to prevent the construction of dams in India, read from her award-winning first novel, The God of Small Things. Then the Japanese duo put poetry to music in a very unconventional way - quite experimental, quite discordant, and probably not to everyone's taste. But, generally, the festival has gotten off to a great start. 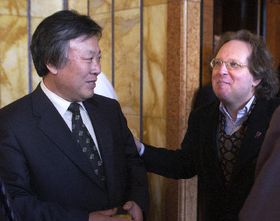 I Mun-jol and Michael March, photo: CTK As far as the other writers contributing to this year's festival are concerned, one is leading Israeli prose writer Amos Oz. He's influenced by Albert Camus' writings and philosophy and is sure to capture the audience's attention. Another major figure is Edna O'Brien. Her first book received both international praise as well as scalding criticism in Ireland during the sixties. Her bold portrayal of women's lives there sparked endless debate. Other names to watch include Scottish writer Irvine Welsh, known of course for Trainspotting as well as for the sequel Porno. Then, don't forget American Jeffrey Eugenides. The New York Times considers his work Middlesex to be one of the three best American novels in bookstores last year. There's also Peter Demetz, born in Prague, whose popular study Prague in Black and Gold meticulously explores the cultural and literary history of this capital city. His newest book is The Air Show at Brescia, 1909 in which Franz Kafka and Max Brod are key figures. 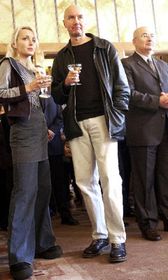 Irvine Welsh, photo: CTK As usual, Czech writers are featured at the festival as well. For example, Josef Nesvadba. A leading Czech science fiction writer, he is the author of stories and novels which are punctuated with a sense of mystery, the grotesque, irony and horror. Some of his books have been translated into English. These include: Vampires, Ltd; In the Footsteps of the Abominable Snowman; and The Lost Face. His latest work is a creation of science fiction with a political twist, titled Benes' Hell, alluding to the troubled presidency of Czechoslovakia's Edvard Benes.

Every day through April 10 will see panel discussions with the writers, evening readings, plus autograph sessions and press conferences. Two of the main venues are the Minor Theatre and the Big Ben Bookshop, both situated in the city center. And if you're going to be in Prague this week and would like more information, take a look at www.pwf.pragonet.cz 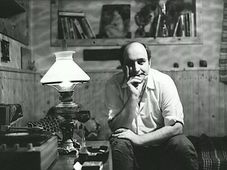 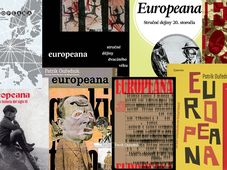