Czech municipalities have become adept at managing their finances, suggests a study carried out by credit rating agency CRIF and cited by the news website iDnes.cz. The country’s local authorities as a whole have been in the black for the last eight years and no less than CZK 125 billion crowns lies in their collective bank accounts. 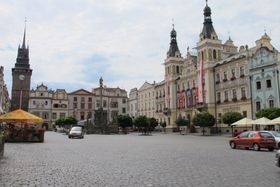 Illustrative photo: Kristýna Maková Some 6,257 municipalities (not including Prague) manage a total amount of CZK 240 billion annually, which is equivalent to around one-sixth of the Czech state budget.

Unlike the state as a whole, local authorities have been in the black for a long time. In 2018 they boasted a surplus of CZK 1.6 billion between them, while even higher figures were recorded in previous years.

Prague is a specific case in that it receives taxes not only as a municipality but also under its status as one of the Czech Republic’s regions.

Other municipalities also have healthy bank accounts and together they possess reserves of CZK 125 billion.

Thanks to the fact it was for some time the registered address of billionaire Zdeněk Bakala, the tiny Modrava in the Šumava Mountains (population 78) boasts unparalleled savings of CZK 573,000 per resident.

The revenues of municipalities, but also of regions, chiefly come from taxes that the state gathers and distributes among them under the Budget Tax Allocation Act.

A nationwide upswing in the collection of the most significant form of taxation – value added tax – has been to the benefit of municipalities, which registered record revenues in 2018.

Another significant income stream for municipalities is investment subsidies, of which they received CZK 16 billion last year.

This figure is down on what it was before, iDnes.cz reported. Between 2010 and 2015 municipalities took in CZK 24 billion annually in investment subsidies. The drop has led them to make investments from other sources, meaning savings or loans.

In its analysis CRIF identified 95 Czech municipalities that managed their finances best between 2014 and 2018, which earned them a top class credit rating under the company’s model.

Such cities, towns and villages are capable of meeting their financial commitments on time, don’t have bank loans and cover outlays without needing to seek investment or non-investment subsidies, a CRIF analyst told iDnes.cz.

Seventy of the top 95 are settlements of less than 500 inhabitants. Among the larger towns or cities on the list are Jindřichův Hradec, Rokycany and Vyšší Brod, iDnes.cz said.

The Czech government plans to obtain finance in the wake of the coronavirus crisis through loans and the sale of bonds, the minister…