Czech Prime Minister Andrej Babiš wants to promote his country’s relations with India to a strategic partnership. He said so in an opening speech at the Vibrant Gujarat Global Summit in Gandhinagar, where he also met with his Indian counterpart Narendra Modi. 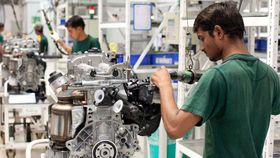 Illustrative photo: Škoda Auto India is the last destination of Prime Minister Andrej Babiš’s tour of South Asia, during which he and his delegation primarily sought to strengthen trade ties with some of the region’s most important economic players.

On Friday, shortly after arriving in India, Mr. Babiš spoke at the Vibrant Gujarat Global Summit, a meeting of important players on the Indian political and business scene. He said that the primary goal of his visit was to strengthen bilateral relations with India and move them forward towards a strategic partnership.

Both countries, according to the Czech PM, have strong ties in trade, investment, energy and science. He also praised India for how much it has opened up its markets in the last few years and said that representatives of 42 Czech companies have arrived with him to discuss business.

Mr. Babiš also met with Indian Prime Minister Narendra Modi for lunch and a further meeting between the two is set for this evening.

On Saturday, the Czech PM is set to meet with Indian President Ram Nath Kovind.

Traveling with the prime minister is a delegation including Minister of Industry and Trade Marta Nováková, as well as representatives of the Czech Confederation of Industry.

A special seminar titled ‘Czech Republic - Prospective Technological Partner of India on the Path to Common Prosperity’ took place at the Vibrant Gujarat on Friday afternoon and a Czech pavilion is also open at the summit.

The head of the local CzechTrade mission, Ivan Kameník, says that the prime minister’s visit is well timed, because Czech business interest in the country is growing annually and even small businesses have a chance to succeed thanks to the size of the market and current efforts to cut red tape.

Czech companies primarily export automobiles, energy devices and machinery to India, while imports from the Asian sub-continent include iron, steel, textiles and spare parts for cars and tractors.